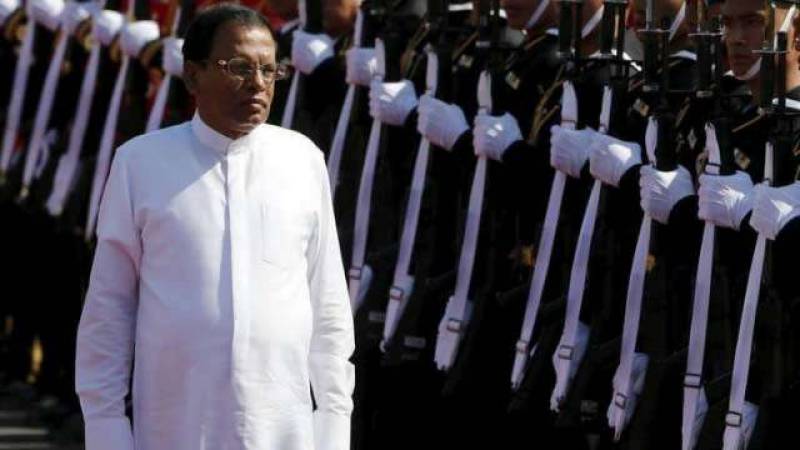 COLOMBO - Sri Lankan President Maithripala Sirisena Wednesday asked Abu Bakr al-Baghdadi to "leave my country alone" after the dreaded Islamic State leader claimed the massive suicide bombings in the island nation was a revenge attack for the fall of the Syrian town of Baghuz, the terror group's final bastion.

Sirisena also warned it may be possible Islamic State had launched a "new strategy" by targeting smaller countries, Sky News Wednesday quoted him as saying.

He said authorities were aware of a "small group" of Sri Lankans who had travelled abroad to receive training from Islamic State over the past decade.

In the Sky News interview, President Sirisena said he had a message for Islamic State: "Leave my country alone."

The man in the IS propagada video, said to be Baghdadi referred to the deadly Easter Sunday attack in Sri Lanka and to the months-long fight for IS's final bastion Baghouz, which concluded in March.

"The battle for Baghouz is over," he said.

"God ordered us to wage 'jihad.' He did not order us to win," he said.

In a segment where Baghdadi is not seen, his voice referred to the April 21 attacks in Sri Lanka, which killed 253 people and wounded nearly 500, as "vengeance for their brothers in Baghouz".

The US-led Kurdish fighters took over the last pocket of land in Syria held by ISIS recently.

Baghdadi, who is now 47, appeared last time in public in Mosul Iraq, in 2014, where he declared an Islamic "caliphate" in the swathes of territory IS then held in Syria and Iraq.

Meanwhile, Prime Minister Ranil Wickremesinghe said the whole world should be on alert following the threat by the eluvsive ISIS leader.

"Abu Bakr al-Baghdadi said his organisation is ready to attack any city in the world at any moment.

This is a threat to the entire world. Therefore all countries in the world should see that their defence forces are on alert," Wickremesinghe said in a special statement on Tuesday.

The Prime Minister said investigations will be carried out on the statement made by ISIS leader that the attacks in Sri Lanka were in retaliation to the capture of the land which was held by them.

He said many arrests have been made and arms are being recovered due to the ability of the security forces and the intelligence units.

"We will arrest the rest who were involved in bomb attacks," he was quoted as saying by the Daily Mirror.

Sri Lankan authorities have said that they suspect the attackers had international links, although the precise nature of those connections are not known.

The US Federal Bureau of Investigation and Interpol, as well as other undisclosed foreign agencies, are helping Sri Lanka with the probe.

Wickremesinghe also assured that security of the people will be assured during the upcoming Buddhist festival, Vesak and said monks will also play a role in it.