Govt has no intention to impose Governor's Rule in Sindh: Fawad
1 Jan, 2019 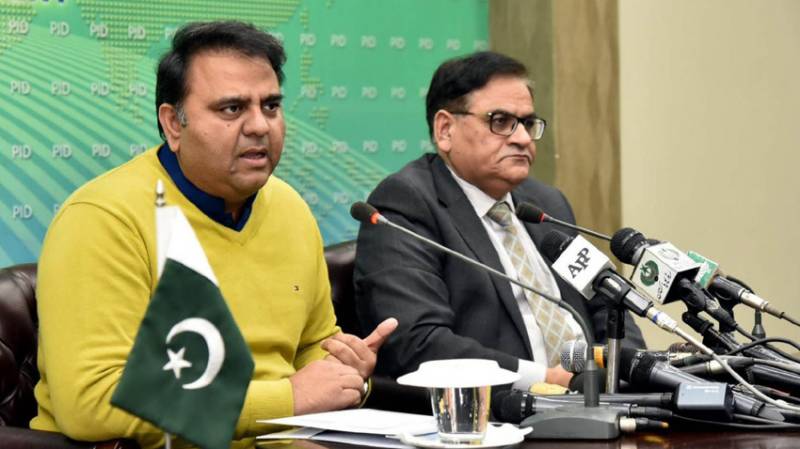 Information Minister Chaudhry Fawad Hussain has said the Federal Government has no intention to enforce Governor Rule in Sindh or topple the provincial government. Talking to media in Islamabad this evening, he said an impression is being given that the federal government intends to interfere to destabilize the Sindh government.

He said Prime Minister Imran Khan has directed that no such impression should be attributed to the federal government.

Chaudhry Fawad Hussain, however, said that Chief Minister Sindh Syed Murad Ali Shah should resign in the wake of serious allegations of corruption against him.

He said PPP's government in Sindh is facing pressure from inside the Assembly for an in-house change. He said Asif Ali Zardari and Nawaz Sharif have mercilessly plundered national wealth and bought properties abroad.

He said federal government believes in independence of institutions and providing conducive environment to them to work independently and freely. He said Asif Ali Zardari had plundered the money meant for the people of Sindh and spent it for personal benefits.

Regarding filing of sixteen references as mentioned in the JIT on fake bank accounts, the Minister said the government has nothing to do with the findings of the report. He said it is prerogative of Supreme Court to discuss merits and demerits of the JIT and the government would follow instructions of the apex court.

Chaudhry Fawad Hussain said the government ants stability in the country but it should not be construed that the drive against corruption will lead to instability.

He said the accountability process under the leadership of Imran Khan will continue unabated and it will bring economic stability to Pakistan.

Referring to a report submitted by FIA in the Supreme Court regarding Asghar Khan case, the Minister said PTI believes it was the worst example of political maneuvering in a democratic society and PML-N had managed all that.

He said FIA should have not asked for closing that case even if he had no prosecutable evidence. He said that Director General FIA will soon brief Prime Minister Imran Khan over this matter.

Responding to a quesion, the Information Minister said the government will review the names placed on ECL as per directions of the Supreme Court.

Answering a question, he said we are not ivolved in any conspiracy. He said Murad Ali Shah should prove his innocence. He said Sindh Assembly members have the right to remove Chief Minister.

Responding to another question, the Information Minister said Asif Ali Zardari missused public funds and that is why the people of Sindh have resentment against him and Bilawal Bhutto Zardari.

Fawad Chaudhry hoped that poitics in the new year will be done in a good way.