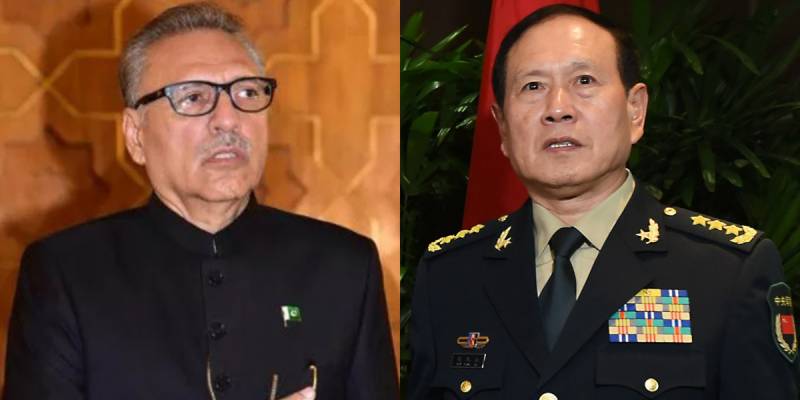 President Dr. Arif Alvi has conferred Nishan-e-Imtiaz Military on Chinese Defense Minister Wei Fenghe in recognition of his services for further promoting and strengthen defense cooperation between Pakistan and China.

According to the details, a special investiture ceremony was held at the presidency in Islamabad on Tuesday. It was attended by the federal ministers, the services chiefs and other senior ranking officials.

Wei Fenghe is a general in the Chinese People’s Liberation Army who served as Commander of the PLA Rocket Force, formerly known as the Second Artillery Corps.

He is Minister of National Defence and the first-ranked State Councilor in Li Keqiang Cabinet II from March 2018, and also the first-ranked ordinary Member of the Xi Jinping-chaired Central Military Commission.

It is pertinent to mention here that on Monday Chief of Army Staff (COAS) General Qamar Javed Bajwa reiterated that Pakistan and China have been standing together all along and their relations will be no different in wake of future challenges.

Inter-Services Public Relations (ISPR) said that the Chief of Army Staff said this while talking to Minister of National Defence of China General Wei Fenghe at General Headquarters.

General Bajwa thanked the dignitary for China’s unwavering support to Pakistan on all key issues at regional and international forums. He said that the Pakistan Army greatly values its time-tested and brotherly relations with China.

During the meeting, matters of mutual interest, regional security, and enhanced bilateral defense collaboration came into the discussion.