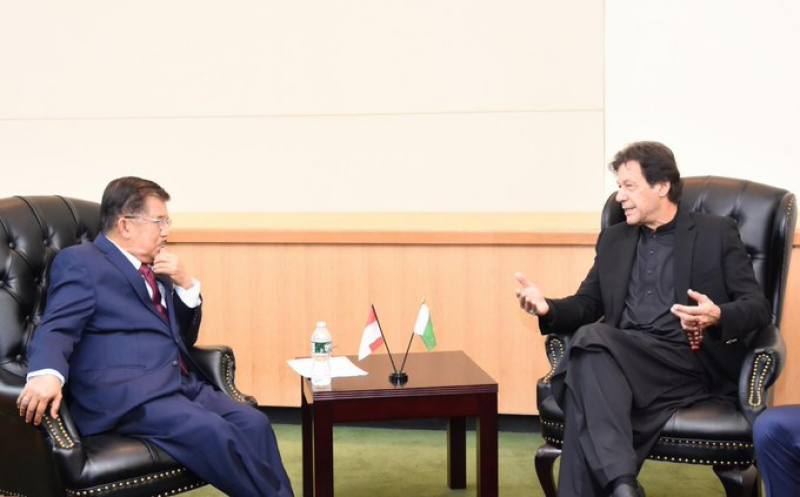 NEW YORK - Prime Minister Imran Khan on Thursday said Pakistan looked forward to Indonesia’s support and understanding on the plight of Kashmiris and attendant risks to peace and security.

The prime minister, in a meeting with Indonesian Vice President Muhammad Jusuf Kalla on the sidelines of 74th session of the United Nations General Assembly, apprised him of the dire human rights and humanitarian situation in the Indian Occupied Jammu and Kashmir (IOJ &K) posing serious risks to lives of over eight million Kashmiris, and to regional peace and security.

He emphasized that the international community must urge India to lift the curfew and other restrictions that had been imposed on the Kashmiri population for over 53 days.

India’s baseless allegations and belligerent rhetoric were reflective of its irresponsible approach and any ill-advised action could further imperil peace and security in the region, he warned.

Recalling the UN Security Council’s meeting on the situation in IOJ&K last month, the prime minister appreciated the decision of members of the Security Council, including Indonesia as a non-permanent member, to prioritize Kashmir on the UNSC agenda in view of Indian illegal and unilateral actions.

Both the leaders exchanged views on matters related to peace and reconciliation in Afghanistan and underlined the importance of successful culmination of the process. The two sides also agreed to further strengthen bilateral trade ties and take steps to deepen mutual economic engagement.