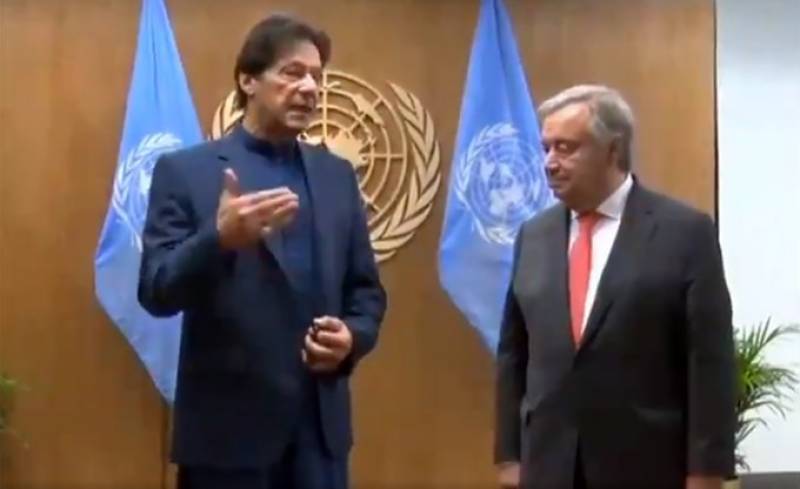 NEW YORK – Prime Minister Imran Khan talked to the Secretary-General of the United Nations, Antonio Guterres on Friday about the crisis in Kashmir.

The premier, who laid bare the designs of India’s ruling regime in occupied Kashmir, told Guterres that the UN must prevent an impending genocide that is likely to take place in Kashmir.

‘8 million people have been put under curfew now for 55 days,’ told the premier to Guterres.

Premier Khan said he fears bloodshed after the lifting of curfew because of the presence of nine hundred thousand troops in the restive valley.

He called on the UN chief to act in time to prevent a crisis as it would be much more difficult after the crisis is full-blown.

Earlier in his emphatic address to the United Nations General Assembly, the premier pressed the UN to compel India lift the curfew in Kashmir.

“If I’m a Kashmiri and I am locked up. I hear about rapes by soldiers. Would I want to live like that? I would pick up a gun. You’re forcing people into radicalisation, taking away their will to live,” added the prime minister in his address.

Prime Minister Imran Khan warned that if there is a bloodbath in Kashmir it would not be due to Islam but due to injustice.

“Forget 8 Million Muslims, had 8,000 Jews been stuck, would the Jewish community not spoken?. Makes me say that are Muslims children of lesser gods?”, Pakistani Prime Minister asked.

The premier said in point-blank remarks that Modi’s arrogance and ego had made him blind.

“Modi is a ‘life member”‘ of RSS. An organisation inspired by Hitler and Mussolini. They believed in racial superiority the same way that the Nazi’s believed in the supremacy of the Aryan race,” said the premier.