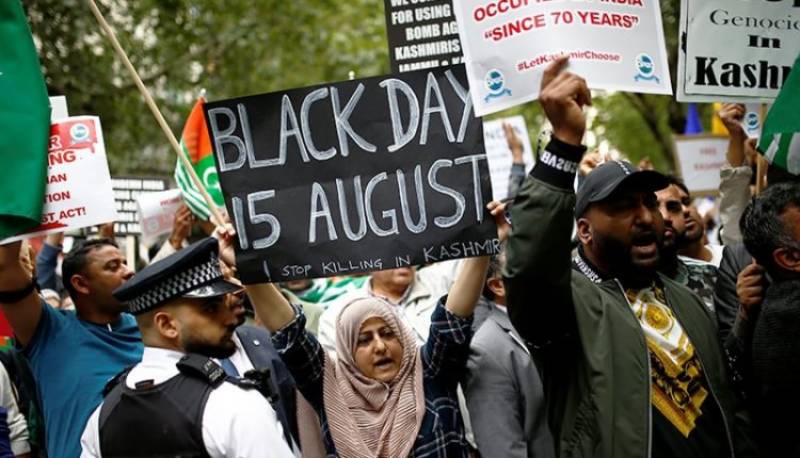 *LONDON: **Kashmiris hold big protests outside BBC headquarters and CNN Regional Office in London against the media giants over insufficient coverage of the human Rights abuses by Indian Military in Occupied Kashmir.*

*Kashmiris gathered outside the headquarters of the British Broadcasting Corporation (BBC) on Thursday, demanding coverage of the ongoing crisis in Indian occupied Kashmir.*

A similar demonstration was held outside the London office of the Cable News Network (CNN).

Protesters held aloft posters and chanted slogans like “BBC, wake up”, “CNN, wake up” and “we want freedom” as they assembled outside the offices of the two media giants, Kashmir Media Service reported.

Several protesters said their tax money, which funds the BBC, is being used but human rights abuses in the occupied valley are not being highlighted. “We are taxpayers, we have the right to know what’s happening to our loved ones in occupied Kashmir. The BBC is ignoring the issue, as is the CNN,” said Mahboob Chaudhry of the Jammu Kashmir Liberation Front.

One protester said that by failing to cover the human rights abuse in occupied Kashmir, the media is not fulfilling its responsibility to hold India accountable to its actions.

Later, the protesters met the editorial management of both the BBC and CNN, and handed over a memorandum, requesting the broadcasters to consider giving due and impartial coverage to Kashmiris