Pakistan faces a disgraceful defeat of an innings at the hands of Australia in the first Test match
24 Nov, 2019 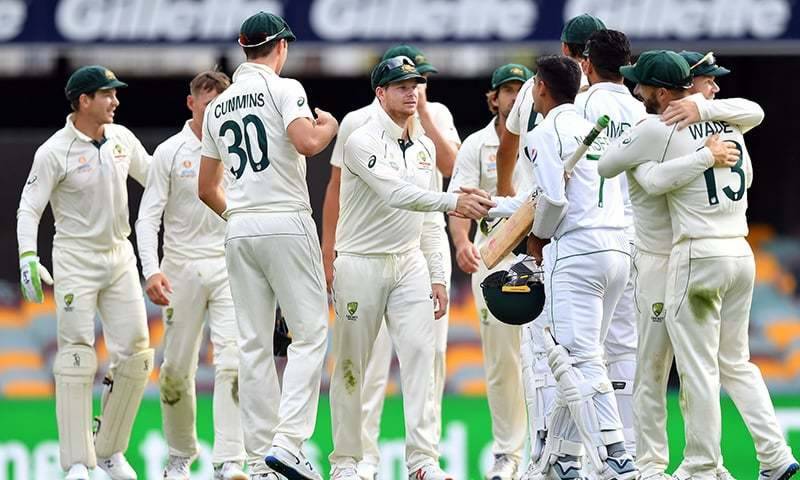 ISLAMABAD - Australia went one up in their two-Test series against Pakistan when they won the first Test by an innings and five runs at the Gabba in Brisbane on Sunday.

Australian skipper Tim Paine said he would prefer all home Test series to begin at the Gabba after his team won the opening match at the Brisbane fortress by an innings and five runs late on the fourth day for their 29th consecutive Test victory at the venue dating back to 1988.

"We like playing here and we've done well here for a long time, so we'd like to start here against anyone," Paine said when asked whether India should open next year's Test tour in Brisbane, the traditional start to an Australian summer.

On India's last tour of Australia, the first Test was moved to Adelaide where the tourists won by 31 runs.

Pakistan were left chasing the match once they were bowled out for 240 in their first innings having won the toss and elected to bat.

Australia replied with 580 on the back of big centuries by man-of-the match Marnus Labuschagne and opener David Warner.

Australia's top three of Joe Burns (97), Warner (154) and Labuschagne (185) scored 436 runs, with Paine saying the team now had the benefit of stability at the top of the order.

"We've known Burnsie's a top-quality opening bat for a long time and it's great having him back in the side opening with Davey (Warner)," Paine said.

"It's been hard to have stability because we haven't been performing as we'd like [...] but I think we've got a pretty good group at the moment and can still get a lot better as well."

After beginning their second innings 340 runs behind Australia and then losing three cheap wickets in the afternoon session on Saturday, the Pakistanis put up stern resistance Sunday before finally succumbing late in the final session.

Babar Azam scored a magnificent century and Mohammad Rizwan fell five runs short of his first as Pakistan were dismissed for 335 late on the fourth day.

Leg-spinner Yasir Shah also made his highest Test score with a fighting 42 to allow the Pakistanis to head to the second Test in Adelaide with some momentum despite the loss.

But there was to be no denying an Australian attack on Sunday which probed and struck at vital moments, whenever Pakistan seemed to be getting the upper hand.

Pakistan captain Azhar Ali said his team had been on the back foot early and not been able to recover.

"When we won the toss, we wanted to score big in the first innings, but I think on the first day we won two sessions but we lost one very badly," he said.

"I think if you lose one session very badly in Test matches it is always very hard to come back from that, especially in Australia."

But he said he was proud of the way they had fought back.

"I'd have to say the way we batted in the second innings, particularly the way Babar and Rizwan batted, they really showed great fight," he said.

Earlier, Azam reached his second Test century — and his first in Australia — with an impressive knock.

The elegant right-hander had been in excellent form in the lead-up games, but was out to a disappointing shot in the first innings for just one.

He was a different player in the second innings, however, and never looked in trouble until he edged Nathan Lyon to wicketkeeper Tim Paine to fall for 104.

The second Test begins in Adelaide on November 29. - APP / AFP