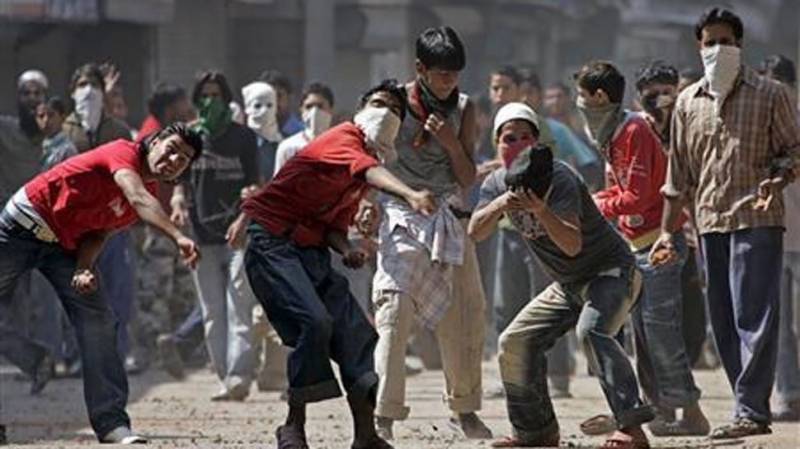 NEW DELHI - With the occupied Kashmir Valley enveloped by rising violence, the Indian Army on Friday said it would prioritize bringing radicalized youth to the mainstream through a "collective approach" and convince militants to "shun violence and gun culture".

The issue of conducting de-radicalizing exercises along with counter-terror operations in the Kashmir Valley was discussed during the ongoing biannual Army Commanders' Conference that began here on Monday amid reports that Islamic State ideology was moulding new-age militants in the state.

"It was felt that priority must be accorded towards ushering peace by conducting counter-terrorist operations that minimize collateral damage. Radicalized youth must be brought into the mainstream by carrying out de-radicalization and collective approach that focuses on convincing the youth to shun violence and gun culture," Director General Staff Duties Lt. Gen. AK Sharma told reporters.

Lt. Gen. Sharma, who earlier headed Nagrota-based 16 Corps in Jammu, didn't explain what kind of exercise the Army would employ to de-radicalize Kashmiri youth who appear to be getting influenced by Islamic State ideology amid heightened violence in the Kashmir Valley.

Staring at yet another possible hot summer with hundreds of militants and many civilians already killed in the first three and a half months of this year, dozens of youths in Kashmir have reportedly joined three prominent militant groups: Hizb-ul-Mujahideen, Lashkar-e-Toiba and a resurgent Jaish-e-Mohammad.

These groups have been historically linked to Pakistan and largely favour a merger of Jammu and Kashmir with Pakistan.

But new-age militants, including those from Ansar Ghazwat ul Hind of former Hizb commander Zakir Musa, have openly favoured pan-Islamism over nationalist goals, seeking "martyrdom or imposition of sharia" and declared jihad against not only India but "apostate" Pakistan too.

Though there is no concrete data available to prove the Islamic State's physical presence in Kashmir, its online propaganda and the way it is influencing young Kashmiris indicate that the global terror group may have Kashmir ambitions at the very least.

Top Army commanders during the six-day conference that ends on Saturday also discussed the current situation along the borders with China and Pakistan, particularly "along the Line of Control, the increase in ceasefire violations and the adequacy of the response mechanisms", said Lt. Gen. Sharma

"The apex commanders confabulated on the prevalent situation in the Valley and reviewed the recent developments affecting modus operandi of the operations of the armed forced deployed in the region," he said, referring to the trend of civilians rushing to shootout sites to hurl stones at security forces in a bid to help militants escape.

The senior commanders, he said, also deliberated at length on the prevailing situation along the northern borders.

"During the conference, considerable time was spent on re-prioritizing the existing requirements to ensure that the resources allocated for force modernization and capacity building were utilized optimally with the budgetary allocation. The discussions also dwelt upon increasing the content of indigenization in force modernization."

On the last day of the conference, the commanders would deliberate on matters pertaining "exclusively to military operations", he said.