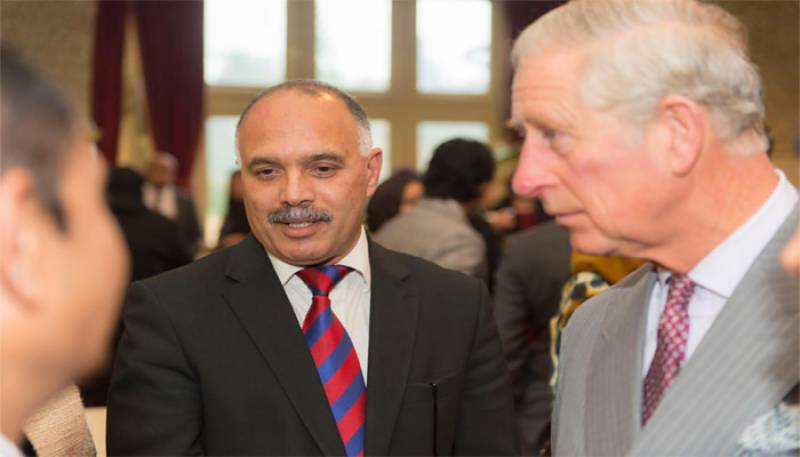 LONDON: A British Pakistani entrepreneur who left school without a single curricular qualification and went on to run a football club has been appointed High Sheriff for Surrey for 2020 - a direct servant to Her Majesty Queen Elizabeth II.

Shahid Azeem will serve in the honorary position for the county of Surrey – the ‘home country’ with a population of 1.4 million, around 20 miles out of London. Surrey is known as one of the most affluent counties, housing mainly white rich class.

It is an esteemed position that dates back more than 1000 years and there are only 45 High Sheriffs, out of a national population of more than 70 million. Shahid Azeem will become the first male Pakistani origin ever to hold the Royally-appointed title of High Sheriff – a direct servant to Her Majesty Queen Elizabeth II.

Shahid Azeem arrived in Britain in 1969 as a nine-year-old son of a migrant from the city of Matore Thesil Kahuta in Pakistan. He was expelled from school at the age of 12, faced bullying and racism but joined a computer system company to make an independent living. He started selling fish and chips at a local ship. His father worked at British Rail as a porter and family lived in a 2 bedroom shared with others in Guildford.

A determined Shahid Azeem went on from doing menial jobs to building a multi-million pound IT business.

Speaking to he said: “This country is great. It’s not perfect but what other country could you go to as a kid with no qualifications, be expelled for fighting and rightly so, and then go on to hold such a position? I’m still a very proud Pakistani but incredibly grateful to a country that has given me so many opportunities.”

He reflected on the positive influences of his own grandfather, Capt Fazal Dad, and those of his wife’s, police SP Sawar Khan.

Shahid explained: “When my father came to England I lived with my grandfather, who was in charge of the area as chairman of a political party. He was seen as the elder of the community so whenever there were issues – be it politics, business or some form of conflict – he was seen as a fair person and the people accepted his decisions. I have always been referred to as the grandson of Captain Fazal Dad.”

Shahid Azeem loved football in his youth and started playing for local teams. He went on to become chairman of National League outfit Aldershot Town.

“Sport was my main route to integration into the mainstream. It makes or breaks people’s weeks. It certainly was for me as a young boy waiting for Chelsea’s results and I loved to read about how the Pakistan cricket team was doing in the early 70’s– players like Zaheer Abbas, Sarfraz Nawaz, Intikhab Alam, Imran Khan and Asif Iqbal were my heroes and still are. I was very proud of my Pakistani heritage. I was trying to relate to them.”

He ran a computer system for the then Ministry for Agriculture, Fisheries and Food (MAFF) in Guildford. He went on to work for GHQ in Cheltenham and the Home Office before setting up his own business in 1989 – after getting a £5,000 loan from a friend. It proved a shrewd investment as Shahid turned it into an IT giant which had a turnover of £120million euros in 2006, with five offices in France, office in Gibraltar, Belgium and UK.

He said: “I sold it because I was missing my kids but I got bored so I started another company [Arcom IT] with my original corporate team.”

He also runs the UK/Europe office of California-based Folio3 which has offices in Karachi, Lahore, Dubai and Bulgaria with over 350 staff.

The Office of High Sheriff is an independent non-political Royal appointment for a single year. There are 55 High Sheriffs serving the counties of England and Wales each year.

The position of High Sheriff has existed for over 1,000 years. In Saxon times the ‘Shire Reeve’ was responsible for maintaining law and order and the collection of taxes within the county on behalf of the Crown.