S.Korean president calls on DPRK to find breakthrough together via dialogue
15 Jun, 2020 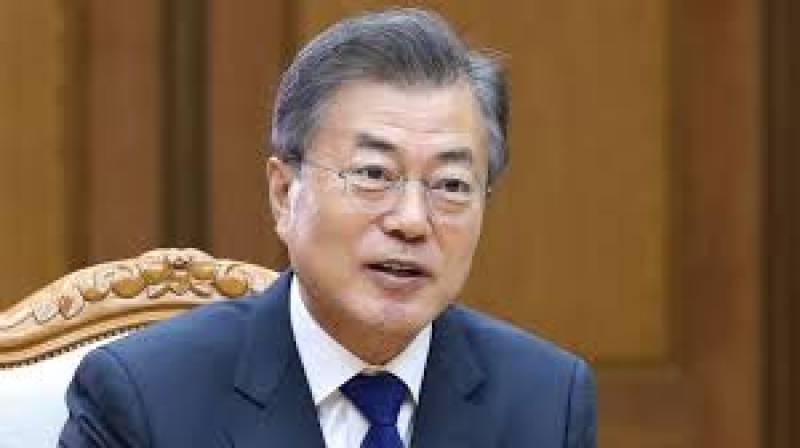 ISLAMABAD-South Korean President Moon Jae-in on Monday called on the Democratic People's Republic of Korea (DPRK) to find a breakthrough together through dialogue, according to the presidential Blue House.

"I know well about Chairman Kim Jong Un's determination and efforts to change the Korean Peninsula situations in an epoch-making way. I also feel very sorry that progress hasn't been made in the DPRK-U.S. and the inter-Korean relations as expected," Moon told a meeting with his senior aides.

It is high time that the South and the North go to find a breakthrough together. The time has come that (the two Koreas) would no longer sit and wait for improved conditions," said Moon.

Moon said he wished to actively find and put into practice the projects that the two Koreas can choose and push for on their own, vowing to continue efforts to gain consent from the international community.

He expressed his anticipation that the DPRK would open its door for dialogue and put ideas together.

Moon's comment came after Kim Yo Jong, first vice department director of the Central Committee of the Workers' Party of Korea (WPK) and younger sister of top DPRK leader Kim Jong Un, said in a statement Saturday night that she had given instructions for decisive action to be taken.

"If I drop a hint of our next plan the South Korean authorities are anxious about, the right to taking the next action against the enemy will be entrusted to the General Staff of our army," She said, adding that the army "will determine something for cooling down our people's resentment and surely carry it out."

The DPRK has repeatedly lashed out at South Korea since last week in protest against anti-Pyongyang propaganda leaflets sent by defectors and activists across the border. Pyongyang has also closed its joint liaison office and cut off all communication lines with the South.

Moon said South Korea and the DPRK should go step by step towards peace and reconciliation, albeit slow-footedly, noting that the agreements, reached by the current leaders of the two Koreas, must be implemented sincerely.

He vowed to make constant efforts for the implementation of the inter-Korean agreements regardless of any change in political situations, calling for Pyongyang to resolve any inconvenient and difficult issues through communications and cooperation with Seoul while refraining from returning to an era of confrontation.

Denuclearization talks between the DPRK and the United States have stalled since the second summit between the DPRK leader and U.S. President Donald Trump ended with no agreement in February 2019 at the Vietnamese capital of Hanoi.

The South Korean president in April offered to the DPRK to resume inter-Korean cooperation by jointly tackling the COVID-19 outbreak.(XINHUA/APP)