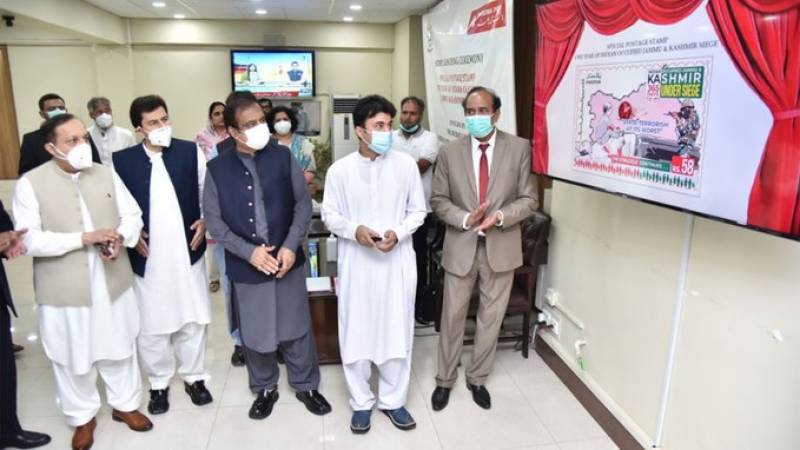 ISLAMABAD-The government has unveiled a special postage stamp in connection with Youme-e-Istehsal to be observed on Wednesday to highlight the wave of terror unleashed by Modi government in Indian illegally occupied Jammu and Kashmir.

Addressing a news conference in Islamabad on Monday, the Minister for Information and Broadcasting Shibli Faraz said the stampage is aimed at sensitizing the world about the atrocities being committed in occupied territory.

Given the worldwide spread of the stampage, he said this symbolic step will transmit a very strong message to the international community.

Shibli Faraz said India has further stoked tension in the region through its illegal actions of 5th August and the world community should take cognizance of it.

He said 5th August is a black day in the history of Kashmir and Pakistan.

The Information Minister appealed to the nation to express full solidarity with the oppressed people of Indian illegally occupied Jammu and Kashmir on Wednesday, showing to the world that the Kashmiri people are not alone and that they stand shoulder to shoulder with them.

Shibli Faraz said there is an organized and effective plan to fully observe Youm-e-Istehsal.

Special functions have been arranged for this purpose whilst PTV and Radio Pakistan will also promote the Kashmir cause.

In his remarks on the occasion, Minister for Communications Murad Saeed shared the main features of the design of postal stampage.

He said the postal stamp shows the one year completion of illegal action in Indian Illegally occupied Jammu and Kashmir, and its brutalities on Kashmiris.

He said Kashmir is jugular vein of Pakistan and the Prime Minister Imran Khan is the person who has forcefully pleaded the case of Kashmir and unmasked the fascist and Hindutva mindset of Modi government at the world level.

He said the day is not far away when Kashmiris will get freedom from the Indian clutches.