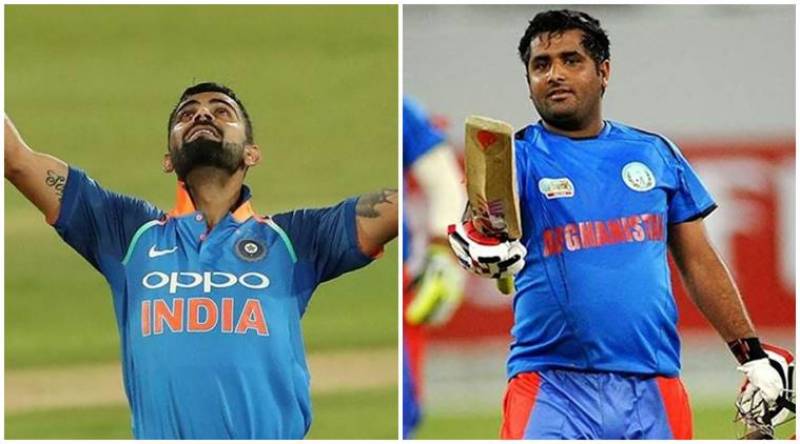 NEW DELHI - At over 90kg, Mohammad Shahzad is the complete antithesis of fitness freak Virat Kohli <link> but the Afghan wicketkeeper-batsman says who needs a punishing regimen like the Indian captain when he can hit longer sixes than the world’s No.1 ODI batsman.

Standing at 5’8″, there is seldom a dull moment when the stockily-built Shahzad is around, both on and off the field.

“Dekhiye hum fitness bhi poori karte hain aur khaate bhi poora hain (I work a lot on my fitness but I don’t compromise on food). You want me to have a fitness routine like Kohli, it is not possible, but I am working on it (losing weight),” Shahzad tells PTI in a chat.

The burly 30-year-old cricketer, who has had an eventful international career dating back to 2009, simply plays by his own rules.

Shahzad doesn’t doubt his ability one bit, so much so that he believes that he can hit bigger sixes than Kohli despite not having the exemplary fitness and skill possessed by the Indian captain.

Having played in a refugee camp in Pakistan, the Jalalabad-based player said that not everyone can be like Kohli. “Jitna lamba chakka woh (Kohli) maarte hain, main unse zyadaa maar saktaa hoon, zaroorat kya hain unki tarah itna diet karne ki (I can hit bigger sixes than Kohli so why do I need to follow his diet?),” says the stumper, whose failed attempts at weight-loss had resulted in a one-year doping ban last year.

He spends a lot of time in India and claims to know top Indian cricketers well. He calls MS Dhoni his “closest friend” in the Indian team and also enjoys a good rapport with Suresh Raina <link> and Shikhar Dhawan <link> (he continuously calls India opener ‘Shekhar’).

The cricketer has often faced criticism for being ‘overweight’ but he has hit back at his critics with match-winning performances. He has defied the odds to become Afghanistan’s leading run-getter in T20s and is second only to Mohammad Nabi in ODI runs.