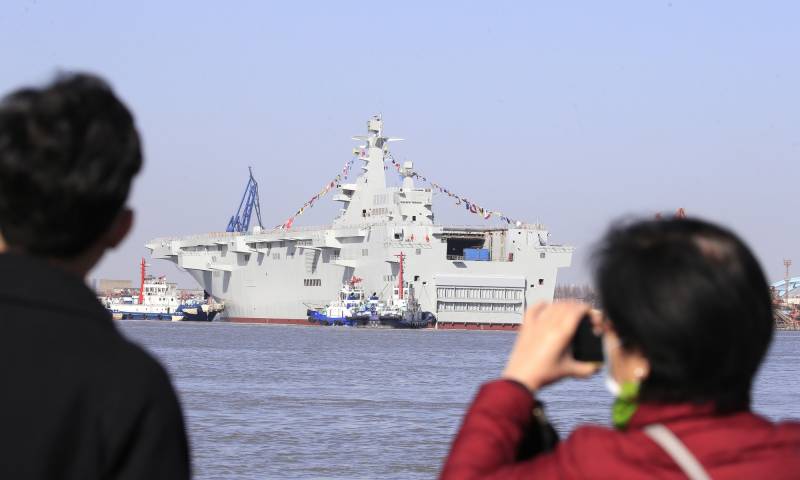 China has now launched three of the large warships at an astonishing speed since the second half of 2019, with Chinese military experts saying the country has cleared technical difficulties in building such kinds of vessel, and more can be built based on the needs of the Chinese People's Liberation Army (PLA) Navy.

China has urgent strategic and tactical needs in amphibious assault ship development; that is, it requires such warships to safeguard territorial integrity and sovereignty in the island of Taiwan and the South China Sea, multiple experts told the Global Times.

The Hudong-Zhonghua Shipyard also launched the second Type 054A/P frigate for Pakistan on Friday in Shanghai, as the Pakistan Navy Chief Naval Overseer highlighted at the launch ceremony that induction of the Type 054A/P warships will significantly enhance Pakistan's maritime defense and deterrence capabilities.

The Pakistan Navy has contracted the construction of four Type 054A/P frigates from China since 2017, and the first ship was launched in August 2020, media reported.

All the ships are being delivered as per the planned schedule, the Pakistan Navy said in a statement sent to the Global Times.

These will be some of the most technologically advanced platforms of the Pakistan Navy Surface Fleet, equipped with modern surface, subsurface and anti-air weapons, sensors and combat management systems, Admiral M Amjad Khan Niazi, Chief of the Naval Staff of the Pakistan Navy, told the Global Times in a recent exclusive interview.