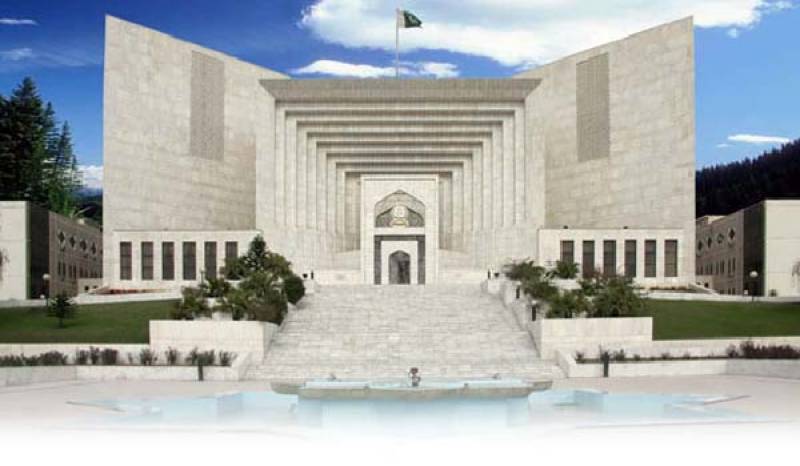 ISLAMABAD: The Supreme Court Tuesday sought details of Niazi Services Limited along with relevant documents of Chartered Accountant in a case seeking disqualification of PTI chief Imran Khan in a week.
A three-judge bench headed by Chief Justice Mian Saqib Nisar resumed hearing of case moved by PML-N leader Hanif Abbasi seeking disqualification of PTI Chief.
During the course of proceedings, Chief Justice asked Naeem Bukhari counsel for Imran Khan to submit response over questions raised by the bench earlier.In response Naeem Bukhari said that the amount sent from London to his client was not public money adding that it was not sent abroad from Pakistan, and then brought back.
He informed the bench that Imran had remained a professional cricketer till 1992 and after that played county cricket in the UK. And he purchased Bani Gala property from those earnings, remitted back to Pakistan, he remarked.Discussing the tax amnesty scheme availed by NSL in the Musharraf era, Chief Justice remarked that it was introduced for Pakistanis only whereas Niazi Services Limited was not a Pakistani company at that time.Regarding London flat, Chief Justice remarked that it was an allegation that Imran Khan did not submit correct declaration in his assets form regarding London flat.
Akram Sheikh counsel for petitioner Hanif Abbasi said that Imran Khan in his nomination papers submitted before the Election Commission of Pakistan (ECP) had not disclosed his London flat.The chief justice remarked that the point raised by the counsel was noted, however, in the application it was not pointed out by the applicant.
Naeem Bukhari maintained that Imran bought the London flat from taxed legitimate cricket earnings in 1983, sold it in 2003 and brought funds back through legitimate banking channels.Naeem Bukhari pleaded that Jemima Khan sent money to purchase Bani Gala’s land through bank.
Justice Umer Ata Bandial asked why Jemima sent extra money than the actual value of Bani Gala Land.Bukhari replied that it was a matter between husband and wife however all relevant papers would be submitted before the court.
He said that the property of Bani Gali was not transferred to Jemima’s name after divorce, and it was registered to Imran Khan’s name in October 2005.He said that his client on the direction of court asked Jemaima Khan for bank statement but it could not be produced today due to bank holiday on Monday in the UK. All material would be submitted before the bench soon after it was received, he added.
The Chief Justice remarked that question is that whether Bani Gala property was transferred according to law or not.
To a question regarding tax returns Bukhari said that all tax returns from 1981 till now would be submitted before the bench in a sealed envelop.Subsequently, the bench adjourned the case till May 31.
It is worth mentioning that a day before Imran Khan submittedadditional papers in the apex court which included the money trail, reasons of not declaring Niazi Services Limited in Pakistan, and details of 20,000 pounds that were sent by Rashid Ali Khan.