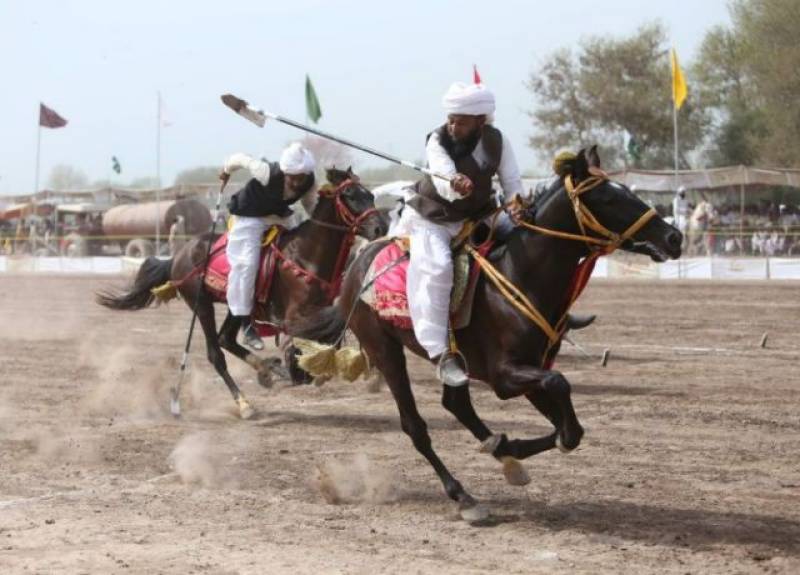 ISLAMABAD - Traditional drumbeats and melodious shahnai flutes are drowned out by thundering hooves in the small Pakistani city of Tulamba, as riders pound down a dusty track seeking world record glory in the ancient sport of tent-pegging.

Riders in bright costumes drive their lances into the targets, wooden pegs embedded in the dry ground, their aim sometimes obscured by the dust kicked up by other competitors.

The cavalry sport requires a mounted horseman to pierce and pick up a peg from the ground at a full gallop.

"This is the sport of young lions," local politician Shaukat Hayat Bosan told AFP. "For this sport not only a good horse but a good rider is also necessary."

This year's event organised by the Muhammadiya Hyderia Sultania Awan Club in Tulamba, held on Wednesday, aimed to be a little different: organisers claim they used it to set six world records.

But, he told the crowd, they established a record for 120 horses reaching the finish line in 166 seconds, and for uprooting 90 tent pegs at once, among others.

They are awaiting final confirmation from Guinness officials.

Organisers hope the bid will draw much-needed international attention to the sport.

Popular for centuries on the sub-continent, tent-pegging has become a dying pastime in Pakistan, mainly kept alive in wealthy Punjab province.

There it remains part of cultural celebrations in urban areas, where riders dress up in traditional waistcoats and turbans of vibrant colors while horses are fitted with shining saddles.

Muhammad Sohail, one of the participants in Tulamba, took the opportunity to call for more support for the sport.

"We are promoting this sport on our own," he said, calling on the Pakistani government to help.

In 2018 Pakistan qualified for the first time in a decade to participate in the tent-pegging World Cup held in the UAE. A total of 12 teams participated in the event. - APP/AFP