Indian Air Force shooting down own Military helicopter in fear of PAF, New revelations surface in the case
31 Mar, 2019 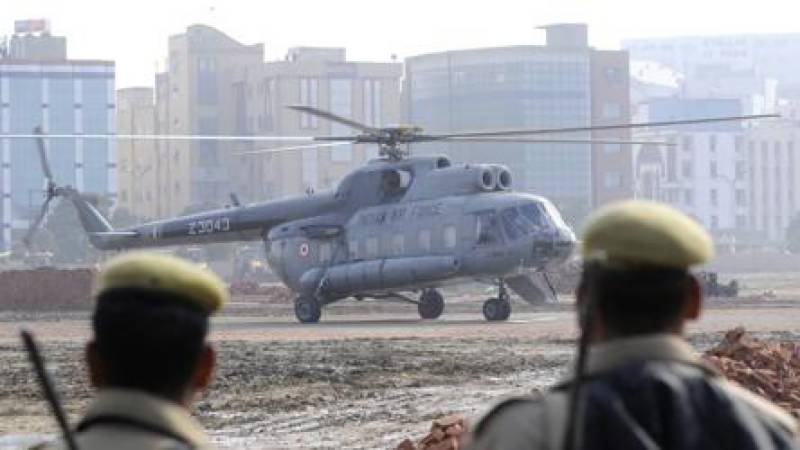 NEW DELHI - Among the threads being investigated in the February 27 crash of an IAF Mi-17 helicopter near Srinagar during a tense standoff with Pakistan include the possibility that it may have been “accidentally” shot down by Indian Air Defence System, officials said.

The officials, who are familiar with the investigation and spoke on condition of anonymity, believe that the Indian Air Force (IAF) helicopter may not have switched on the Identification Friend or Foe (IFF) system which identifies the flying object to radars, whether it is a an enemy or one of its own. The IFF technology developed during World War II is an instrument within the aircraft or a helicopter which sends signals to nearby radars giving its identification signatures.

The IAF refused to comment on speculation that the helicopter, which crashed in Kashmir region killing all six personnel on board, may have been shot down by the air defence system which was on the highest alert after Indian air strikes at Balakot in Pakistan on February 26.

An IAF spokesperson would only say, “In any flying accident the Court of Inquiry looks into all possibilities before conclusively establishing the cause of an accident. In the instant case also, the ongoing Court of Inquiry is looking into every possibility that could have caused the accident.

Before the court submits it’s report it will be premature to comment.” The helicopter was flown by Sqdn Leader Siddharth Vashisht with other members Sqdn Ldr Ninad Mandvgane, Kumar Pandey, Sergeant Vikrant Sehrawat, Corporals Deepak Pandey and Pankaj Kumar. It crashed at Budgam after taking off from Srinagar airport at 10:10 am, soon after Pakistani Air Force jets had attempted to violate the Indian airspace at around 9.30 am on February 27.

The Pakistani Air Force, intruding in Rajouri sector of Jammu region on February 27 Baramulla around the same time when the helicopter was airborne from Srinagar airfield.

The he air defence system is believed to have fired at the helicopter by then, killing all the personnel and a civilian on the ground, officials said.

If this line of inquiry is pursued, the investigators will also try to find out whether the pilot inadvertently did not switch on the IFF or whether the instrument malfunctioned, they said.