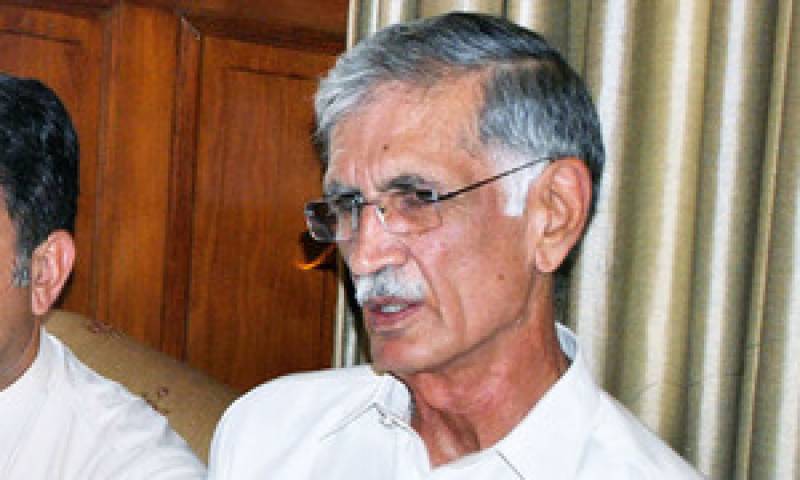 PESHAWAR: Former chief minister Pervez Khattak, who had earlier threatened to revolt if not made chief executive of the province again, said here on Monday that there was no grouping in PTI on the issue.

“Imran Khan will decide about the chief minister of KP,” Mr Khattak told journalists after a meeting of his party’s MPAs-elect held in the Speaker’s House here on Monday evening.

Former CM disowns statements about his possible revolt against party

He said that there was no grouping in the party over the slot of chief minister. He said that propaganda was underway on television regarding him. “We are soldiers of Khan Sahib (Imran Khan),” he added.

Around 20 MPAs-elect attended the meeting, which was convened by the speaker of provincial assembly, Asad Qaiser. Officially PTI claimed that it was just a get together and there was no hidden agenda to be discussed in the meeting.

However, sources said that the meeting was convened to build pressure on PTI central leadership to select Mr Khattak for the coveted slot of the chief minister. They said that Mr Khattak was giving the impression through media campaign that he had the support of 40 MPAs-elect and was asking the party circles to appoint him chief minister.

Sources said that Mr Khattak was of the view that no one else other than him could run the office of the chief minister.

“That’s why Pervez Khattak and his supporters in the provincial chapter of PTI convened the meeting to show their strength and convey a message to Banigala, the residence of Imran,” said sources. However, they said that it was a flop show that’s why the tone of Pervez Khattak was soft.

Sources privy to the development said that a year ago the central leadership of PTI had conveyed to Mr Atif that he would be the next chief minister if the party came into power again in the province.

Besides Atif, Asad Qaiser, Pervez Khattak and Taimur Jhgara are said to be in the run for the post of the chief minister.

Shah Farman on the occasion told journalists that it was consultative meeting about the next chief minister. He said that Imran Khan knew his lawmakers and their capabilities.

He said that every lawmaker had the desire to become chief minister.