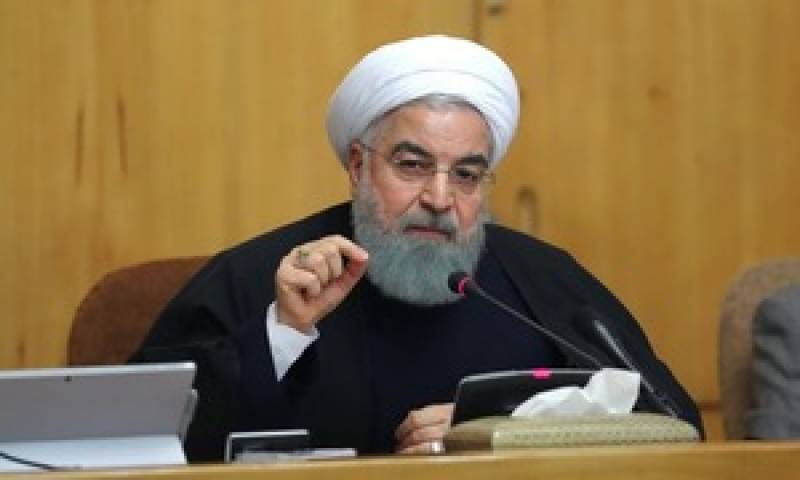 TEHRAN: Iran’s currency plummeted to a record low on Monday, a week before the United States restores sanctions lifted under the unraveling nuclear deal, giving rise to fears of prolonged economic suffering and further civil unrest.

Already last month, protesters clashed with police outside parliament in Tehran in three days of demonstrations sparked by the Iranian rial plunging to nearly 90,000 to the dollar. That followed country-wide economic protests in December and January, in which 25 protesters were killed and nearly 5,000 people were arrested.

Iranians have already seen their savings dwindle, and shopkeepers are increa­singly refusing to sell certain goods, unsure of their true value. Many fear things will only get worse once the sanctions go into effect.

“If the rate keeps going up like this, nobody knows what is going to happen,” said Tehran resident Rasool Shadi. “I think people should stop buying for a while. If they don’t buy something, its price will definitely decrease.” The government last week replaced the country’s central bank governor Valiollah Seif, whose policies have also been blamed for the rial’s fall, and eased regulations on bringing foreign currencies into the country to combat black market trading.

It’s too early to tell whether those moves will have any significant effect. Under the new leadership, the central bank on Sunday blamed the currency’s free fall on “the enemies’ conspiracies ... in line with disrupting the economy as well as disturbing people’s peace of mind.”

President Donald Trump’s administration withdrew from the landmark nuclear accord in May, saying it was too generous to Iran. It has vowed to ramp up sanctions until Iran radically changes its regional policies, including its support for regional militant groups, something the country’s leaders have long refused to do. Tehran-based economist Saeed Leilaz criticised the government for not taking stronger measures, saying it “suffers from horrible inaction and absence of decision making.”

“People’s concerns are very reasonable in the existing conditions,” he told The Associated Press. “They are protecting their own interests by converting their rials to foreign currencies or gold coins.” Fereshteh, a retired civil servant who would not give his last name, fearing repercussions, said he had just bought a medicine he needs, which had gone up in price.

“That’s why we are worried,” he said. “If the upcoming sanctions are imposed what is going to happen? I hope everything is fixed.”

The Trump administration began dismantling the sanctions relief that was granted to Iran under the 2015 nuclear deal in June, a month after he announced the United States’ unilateral withdrawal from the international accord.

The Treasury Department gave American businesses and US-controlled foreign firms dealing in certain types of trade until August 6 to wind down their operations or face penalties under US sanctions. Another set of licenses covering other types of commerce, including oil purchases, will be revoked in the coming weeks, with firms given until November 4 to end those activities.

The other parties to the agreement Britain, China, Germany, France, Russia and the European Union have been scrambling to try and save the deal, under which Iran was given relief from sanctions in return for curbs on its nuclear program.

Their efforts have been complicated by the American threat to punish companies from other countries that continue to deal with Iran, as the Trump administration steps up its efforts to isolate the country and its faltering economy from international financial and trading systems.

Iranian Foreign Minister Mohammad Javad Zarif on Sunday claimed the US strategy would fail, saying he was “confident we can, over the next few months, show the Americans that they must quit their addiction to sanctions.” “Europeans should decide whether their businessmen, banks and governments want to pursue European interests or American interests, or in particular Trump’s interests,” he said.

Trump has been in a war of words with Iranian leaders, but has also suggested that as the sanctions take effect, he expected them to call and offer to return to the negotiating table.

“We’re ready to make a real deal, not the deal that was done by the previous administration, which was a disaster,” he said last week. While US intelligence agencies maintained that Iran complied with the Obama-era agreement to halt its nuclear program, Trump had complained that the deal didn’t do enough to curb Iran’s malign influence in the region.

Iran has ruled out any new talks, saying the US cannot be trusted.

“With this America and the policies it’s pursuing, there’s definitely no possibility of negotiations,” Foreign Ministry spokesman Bahram Ghasemi said during his weekly briefing.

Internationally, oil prices have been rising on concerns about the ongoing dispute and the American push for other countries to cut oil imports from Iran by Novem­ber 4. Brent crude futures were up 42 cents Monday to $75.12 a barrel.