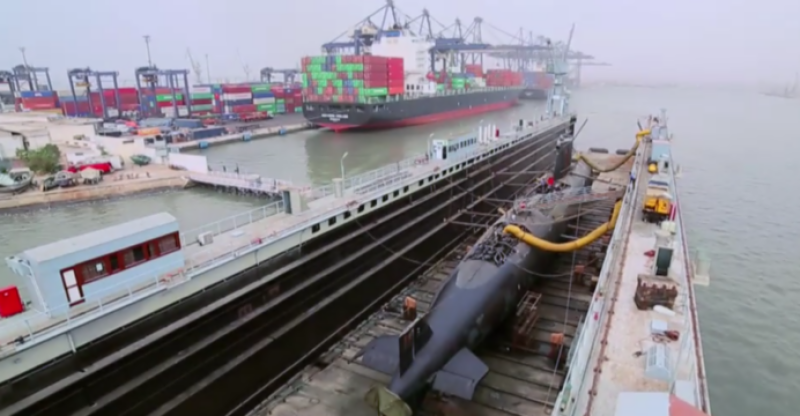 In its press release, STM states: “Within the scope of the project, the detail design of the port is planned to be done by STM, including hydrographic / oceanographic survey and geological and geotechnical survey studies to meet the needs of the Pakistan Navy.”

The STM contract suggests that a naval infrastructure program is underway, potentially a new naval base or an additive element to Gwadar or Ormara. In 2014, the Navy announced that it will shift its submarine fleet to Jinnah Naval Base in Ormara.

The Pakistan Navy has recently brought several infrastructure programs to fruition. In November, the Navy commissioned a new very low-frequency radio communications base in Sindh. In May, it activated Naval Air Station PNS Siddiq at Turbat, Baluchistan.

STM is one of the Pakistan Navy’s leading suppliers. Its first big-ticket program was the supply of a $80-90 million U.S. 15,600-ton fleet tanker. With Karachi Shipyard & Engineering Works’ (KSEW) support, STM launched the ship for sea trials in August 2016.

In June 2016 STM inked a contract with the MoDP to undertake a mid-life upgrade of the Navy’s Khalid-class Agosta 90B submarines. The cumulative value of the contract is $350 million. The first ship is scheduled for delivery in 2020, with the remaining due within one year of one another.

STM is also poised to secure its biggest naval contract yet in the sale of four MILGEM corvettes to Pakistan. In May, the MoDP signed a letter-of-intent with the Turkish government and STM for the ships with the expectation of signing final contracts at the end of June.

This has yet to occur, but the MoDP did list the construction of new corvettes an objective for KSEW in its recent yearbook. If signed, this program would have a cumulative value of $1 billion. The Navy is seeking new corvettes to takeover the patrol and anti-submarine warfare roles of its obsolete Type 21 frigates.

STM may also be collaborating with KSEW in the design of a new miniature diesel-electric submarine (SSK) to replace the Navy’s Cosmos MG110 mini-SSKs. The MoDP listed the construction of a new mini-SSK as an objective for 2016-2017.

Besides the MILGEM, STM is believed to be among the companies the PN is consulting on a possible bid for four to six new fast attack crafts for Gwadar. As per the MoDP, the Pakistan Navy is also planning for a submarine rescue and salvage vessel, which could be of interest to STM. - Quwa