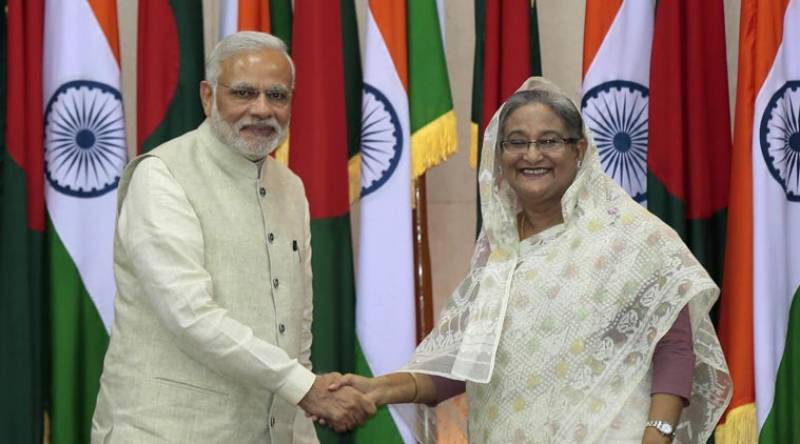 New Delhi — India's northeastern state of Assam is donning the look of a fortress, a day before the release of the National Register of Citizens (NRC). Apart from the local security apparatus, approximately 60,000 troops of the central paramilitary force have been deployed at every nook and corner of sensitive areas in anticipation of tensions that could flare up with the announcement of the list that is basically aimed at weeding out the thousands of Bangladeshi immigrants who have illegally settled in that part of India over the last five decades.

[image: An Indian Border Security Force (BSF) soldier stands guard at the border outpost at Lathitilla near the India-Bangladesh border in Karimganj district of Assam, India. (File)] The citizens' list is based on the census conducted in the state for the first time after the census of 1951. Those who do not figure in the list (Bangladeshi migrants, mostly Muslims) will have to leave the country.

The draft NRC list will be available to the public from January 1, 8 am (Indian Standard Time) online at several government websites.

​"For keeping the situation under control, additional 85 companies of central security forces have arrived in the state in two batches," Mukesh Sahay, Director General of Police, Assam told the media.

Sahay said the Indian Army has also been put on alert as their services would be required in case the situation goes out of control.

The NRC has enlisted only those persons who have submitted documentary proof that their families have been residing in India since at least March 24, 1971. The Assam Police have already registered 147 cases of submission of forged or misleading documents. However, those left out in the draft NRC would be given time to gather the required documents. No specific date has been fixed for finishing the verification process of such applications or documents for updating the NRC.

"The verification of supporting documents submitted by NRC applicants, both within and outside Assam, is under progress," Hansraj Gangaram Ahir, India's Minister of State for Home Affairs said on Friday in Parliament.

​Weeding out illegal immigrants in order to save job opportunities and resources for the local population was one of the election promises of the ruling Bhartiya Janata Party (BJP).

"They must go back, they are robbing the youths of India of their livelihood," Narendra Modi had said in a rally ahead of the 2014 general elections.

According to an estimate, there are currently two million Muslims in Assam who trace their roots to Bangladesh. The NRC has triggered a conspicuous fear among not only the illegal immigrants but also those Indian citizens who have no documentary proof to show their forefathers belonged to the country. At least a dozen people in Goalpara, Sonitpur, Silchar districts have committed suicide in the last one month due to fear of being thrown out of India.

"We are living here for generations but today we are finding it difficult to provide documents to support our claims that we are Indians," Abdul Rahman, a resident of Cachar district where Muslims make up for 37.7% of the total population told to Sputnik.

"We are four in the family. We have been running from pillar to post in order to secure documentary proof of our residence. But since my father is an illiterate laborer, he did not possess any such papers. We are having sleepless nights," Rahman added.