Think of closing and not winning Afghan war, Pak tells US
30 Mar, 2018 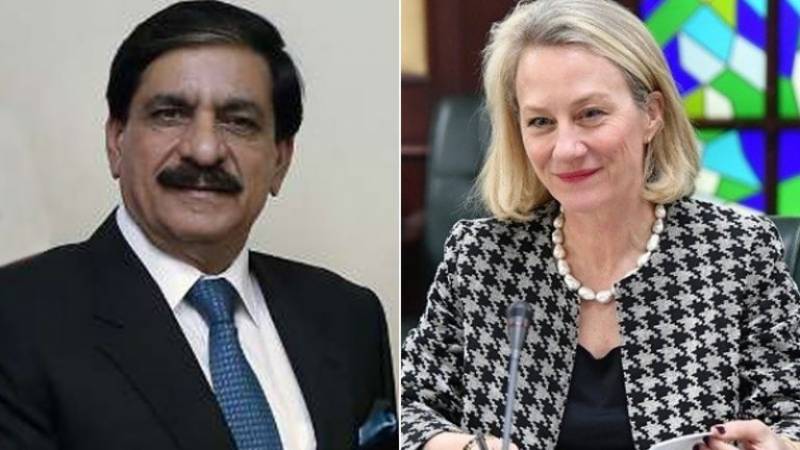 Ambassador Wells is in Islamabad to discuss matters pertaining to terrorism, bilateral relations and the regional security situation.

Welcoming the US dignitary, Lt Gen (r) Janjua stressed that Pakistan and the US had a common cause in seeking ‘early closure’ to the decades-old conflict in Afghanistan. He welcomed President Ghani’s peace offer and termed it as a great opportunity to end the perpetual conflict. “It’s a light at the other side of the tunnel,” he told the visiting dignitary.

Lt Gen (r) Janjua assured Ambassador Wells that Pakistan along with all regional countries and the US will support the new peace initiative. He apprised the US official of his recent visit to Kabul where he had held in-depth, positive and constructive discussions with President Ashraf Ghani and other senior government officials.

Ambassador Wells agreed on the need to support President Ghani’s peace offer and to make efforts for a peaceful and stable Afghanistan through political reconciliation. “United States policy on Afghanistan is also meant to ultimately bring the insurgents to the peace table for negotiations on finding a peaceful and enduring solution,” she said. “Good relationship between Pakistan and Afghanistan which will help them to work in a cooperative framework,” she hoped.

Ambassador Wells reiterated that the US valued its relations with Pakistan and was ready to extend cooperation on all issues including the repatriation of Afghan refugees and the common objective of peace, development and stability in South Asia.

Lt Gen (r) Janjua also apprised Ambassador Wells of the ongoing efforts against terrorism. He said Pakistan’s unswerving commitment to eradicate all forms of terrorism was in its own national interest. In this context, he also stressed the need for posing trust in each other and continuing intelligence sharing and cooperation.

Both sides agreed that the momentum of peace initiative unveiled in Kabul by President Ashraf Ghani and followed up at the Tashkent conference needs to be carried forward. Mechanisms for return of Afghan refugees and strengthening border management were also discussed. Both sides reiterated their firm commitments to act against all terrorist groups that target Pakistan and Afghanistan.