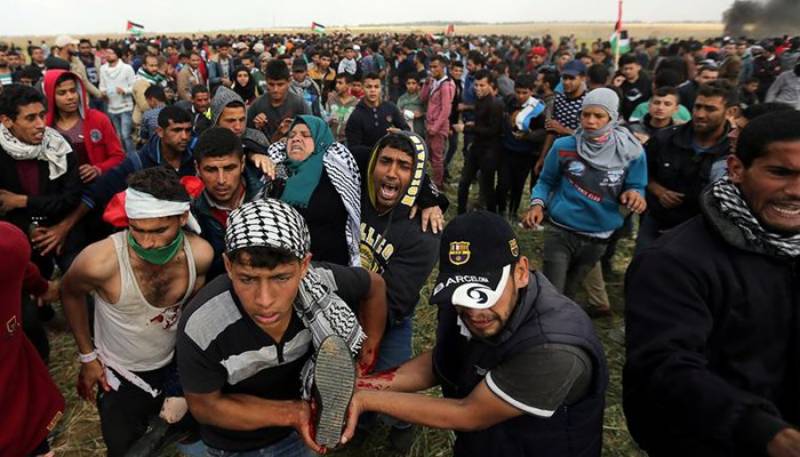 At least 12 Palestinians were killed and hundreds injured by Israeli security forces confronting one of the largest Palestinian demonstrations along the Israel-Gaza border in recent years, Gaza medical officials said.

Tens of thousands of Palestinians, pressing for a right of return for refugees to what is now Israel, gathered at five locations along the fenced 65-km (40-mile) frontier where tents were erected for a planned six-week protest, local officials said. The Israeli military estimate was 30,000.

Families brought their children to the encampments just a few hundred metres (yards) from the Israeli security barrier, and football fields were marked in the sand and scout bands played.

But as the day wore on, hundreds of Palestinian youths ignored calls from the organisers and the Israeli military to stay away from the frontier, where Israeli soldiers across the border kept watch from dirt mound embankments.

The military said its troops had used “riot dispersal means and firing towards main instigators.” Some of the demonstrators were “rolling burning tires and hurling stones” at the border fence and at soldiers.

Two Palestinians were killed by tank fire, the Gaza Health Ministry said. The Israeli military said the two were militants who had opened fire at troops across the border. -Agencies