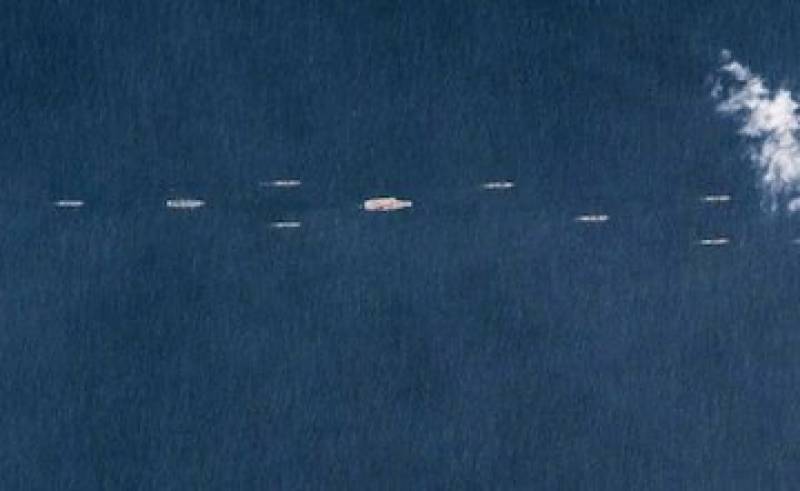 *BEIJING - *Beijing flexed its military muscle this week as its sole operational aircraft carrier apparently took part in a huge naval drill with dozens of other vessels in the South China Sea, satellite images showed.

The pictures, taken by Planet Labs Inc., appear to show the Liaoning carrier at the centre of a formation of more than 40 other ships lined up in pairs south of China's Hainan province island on Monday.

China's defence ministry refused to confirm whether the Liaoning took part in drills this week but military experts say the aircraft carrier is identifiable.

China's defence ministry refused to confirm whether the Liaoning took part in drills this week. (AFP) "Such a formation serves more of as a visual spectacle with the Liaoning the status symbol of the PLA (People's Liberation Army)," Char said.

"This formation is unlikely to be used in actual combat situations," he said, adding that he would "not be surprised" if it was purposely aimed at being picked up by satellite images.

Beijing has also been asserting its vast claims to the South China Sea, transforming reefs into islands capable of hosting military equipment.

Brunei, Malaysia, the Philippines, Vietnam and Taiwan have their own claims to the sea, while US warships regularly conduct "freedom of navigation" operations near islands controlled by Beijing.

"We can expect the (Chinese naval) presence in the South China Sea becoming more regular, especially with the increase in freedom of navigation patrols by the United States as well as other countries," Char said.

Jeffrey Lewis, of the Middlebury Institute of International Studies, said that while it was a "large naval drill", past photos have shown the carrier "travelling in such a formation."

"It was probably transiting to a location," he said.