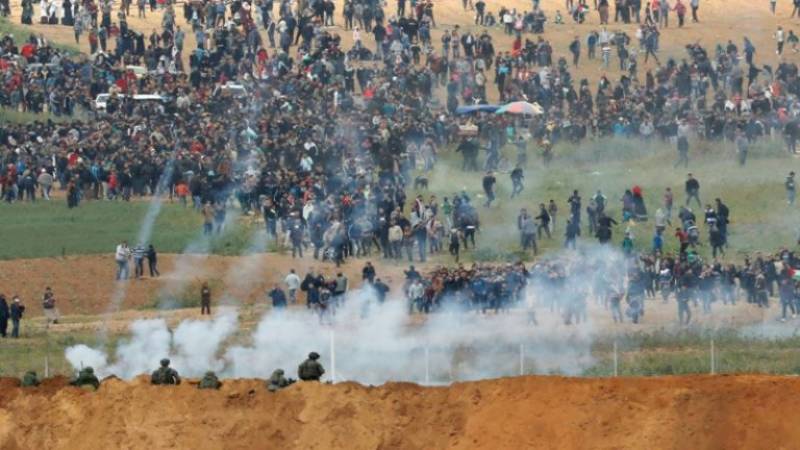 JERUSALEM- Clashes erupted as thousands of Gazans marched near the Israeli border in a major protest on Friday, with five Palestinians killed and more than 50 wounded.

Some Gazans estimated the total number of protesters in the tens of thousands, including women and children.

They gathered at multiple sites throughout the blockaded territory, which is flanked by Israel along its eastern and northern borders, AFP correspondents said.

Smaller numbers approached within a few hundreds metres (yards) of the heavily fortified border fence, with Israeli troops using tear gas and live fire to force them back.

The Palestinian Red Crescent reported 201 people wounded from live fire, while the health ministry in the Gaza Strip said four people were killed during the clashes.

“The rioters are rolling burning tyres and hurling firebombs and rocks at the security fence and at (Israeli) troops, who are responding with riot dispersal means and firing towards main instigators.”

Earlier in the day, before the main protests began, a Palestinian farmer was killed by Israeli tank fire near the border, the health ministry said.

Protesters were demanding hundreds of thousands of Palestinian refugees who fled or were expelled during the war surrounding Israel’s creation in 1948 be allowed to return.

Hamas leader Ismail Haniya attended the protest, believed to be the first time he had gone so close to the border in years.

Organisers said the six-week protest would run until the inauguration of the new US embassy in Jerusalem around May 14.

The upcoming embassy move has added to tensions surrounding the march.

Israel announced a “closed military zone in the area surrounding the Gaza Strip,” accusing its Islamist rulers Hamas of using the lives of civilians “for the purpose of terror.”

It has deployed reinforcements, including more than 100 special forces snipers, for fear of mass attempts to break through the security fence.

Israeli Defence Minister Avigdor Lieberman said in a Twitter post directed to Gazans in both Hebrew and Arabic that “Hamas’s leadership is playing with your life.”

“Anyone who approaches the fence today will be putting themselves in danger.”

US President Donald Trump’s recognition of Jerusalem as Israel’s capital in December has infuriated Palestinians, who claim its annexed eastern sector as the capital of their future state.

Hamas has fought three wars with Israel since 2008. - APP/AFP