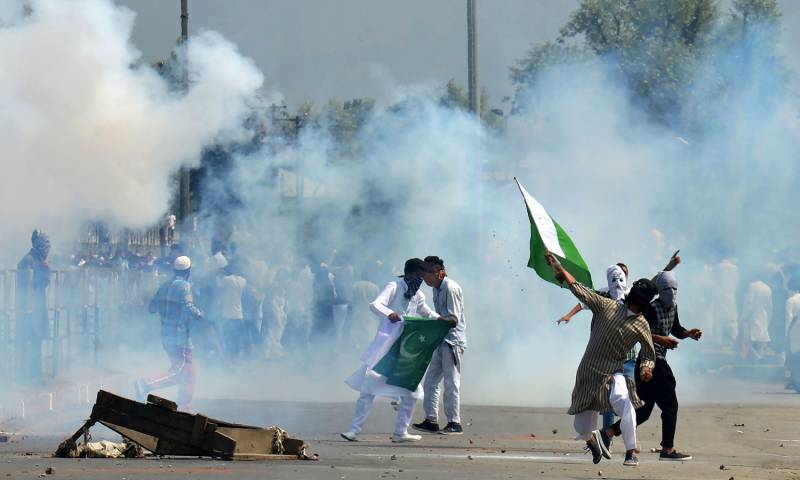 ISLAMABAD (APP): Over one hundred people were injured, some of them critically, due to use of excessive force by Indian forces' personnel on peaceful protesters across the Kashmir Valley.

The demonstrations were aimed at registering protest against the killing of innocent civilians by Indian troops and police in the ongoing Kashmir Intifada. The Intifada was triggered by the extra- judicial murder of commander, Burhan Wani, on July 8.

The protesters raised high-pitched pro-freedom, pro-Pakistan and anti-India slogans. Pakistani flags were also waved at several places. Indian Army, paramilitary and police personnel resorted to firing of bullets, pellets and teargas shells to disperse the protesters. Around 120 people sustained injuries in the action of the forces' personnel. Many of the injured were admitted in various hospitals in critical conditions.

In Srinagar, the demonstrators tried to submit a memorandum containing details of human rights violations by Indian troops and police to the United Nations Observer's office at Sonawar. As they reached at the gates of the UN office, the policemen and troops deployed there fired teargas shells to disperse them.

The forces' personnel also made indiscriminate and excessive use of pepper gas in various areas of Srinagar city to quell protests. The residents of these areas particularly elderly people and chest patients complained of severe health problems due to the gas.

In Islamabad town and other areas, mosques reverberated with pro-freedom slogans. Songs eulogizing Burhan Wani were played on the loudspeakers of the mosques.

Residents of many areas of the Valley told mediamen that the paramilitary and police personnel barged into residential houses, smashing windowpanes and beating up the inmates including women and children.