Protests against Donald Trump in front of White House
30 Jan, 2017 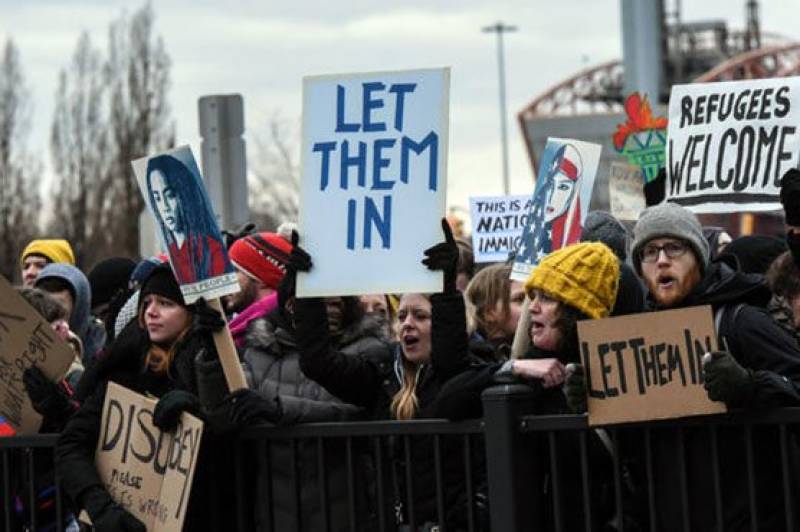 NEW YORK (AFP) - The United States was hit Sunday by a second day of protests denouncing Donald Trump s ban on travelers from seven Muslim countries as the president stood unrepentant in the face of judicial stays and global outrage.

Protesters gathered outside the White House and in New York s Battery Park, across the harbor from the Statue of Liberty -- America s famed beacon of freedom and immigration -- and more were expected at airports nationwide.

Trump signed the temporary ban as an executive order on Friday afternoon, suspending the arrival of all refugees for at least 120 days and barring visa holders from Iran, Iraq, Libya, Somalia, Sudan, Syria and Yemen.

Also affected were foreign dual nationals from European Union countries and at least initially green card holders already on the path to US citizenship. Canadian and US dual passport holders were allowed through.

Travelers were detained at US airports, splitting families -- such as a father unable to reach his son s wedding, and a grandmother unable to meet her grandchildren -- and officials warned it was a "gift to extremists."

Six Syrians were turned away from Philadelphia International Airport and sent back to Lebanon, an official at Beirut airport told AFP on Sunday.

But Trump -- the real estate billionaire turned Republican commander-in-chief -- was unrepentant Sunday, defending his policy in the face of growing outrage across the globe and from Americans at home.

"Christians in the Middle-East have been executed in large numbers. We cannot allow this horror to continue!" he tweeted to his nearly 23 million followers.

"Our country needs strong borders and extreme vetting, NOW. Look what is happening all over Europe and, indeed, the world - a horrible mess!" he added.

But his chief of staff Reince Priebus did backpedal over the inclusion of green card holders telling NBC television that the ban "didn t affect them."

But he did stress anyone -- US citizens included -- traveling back and forth to countries on the list would be subject to further screening upon arrival.

"This is something that 75 percent, 80 percent of Americans out there agree with," he insisted.

Trita Parsi, president of the National Iranian American Council, called for greater clarity, telling AFP there was a "tremendous amount of confusion." There are more than one million Iranians living in the United States.

The order -- seemingly implemented without prior coordination with airport authorities and foreign allies -- sparked chaos, leading to around 300 travelers being stopped or detained worldwide after taking effect.

On Saturday night, a federal judge in New York said US authorities could not deport refugees or other people detained on arrival. Slowly, some of those detained were released.

Democratic Senator Chuck Schumer said he had been told 42 people remained in detention Sunday. Top Trump aides downplayed the number as "a couple of dozen."

The Department of Homeland Security agreed to comply with court orders not to deport people, but said it would otherwise continue to enforce the order.

"The US government retains its right to revoke visas at any time if required for national security or public safety," it said in a statement.

Trump fanned further disquiet by giving controversial adviser Steve Bannon, a founding member of far-right website Breitbart News, a permanent seat on the National Security Council at the expense of other security chiefs.

While Bannon was promoted, the Director of National Intelligence and chairman of the Joint Chiefs of Staff will now be present only when "their responsibilities and expertise" are required, said an executive memorandum.