Why US defence and military chiefs are coming to Pakistan?
30 Aug, 2018 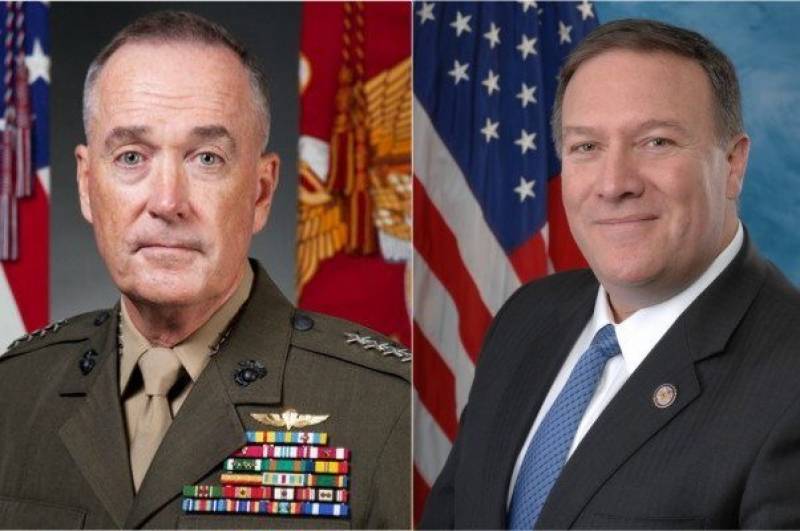 Speaking at a news briefing at the Pentagon on Wednesday, Mattis said Pompeo and General Dunford will meet with PM Imran and other Pakistani leaders and discuss relations between the two countries.

The two dignitaries are expected in Islamabad for a one-day visit on September 5.

Pompeo will hold discussion with Prime Minister Imran Khan and his team on issues of mutual interests. The US secretary of state will be the first foreign dignitary to meet the newly elected Prime Minister, who took oath of his office on August 18.

“Secretary Pompeo expressed his willingness to work with the new government towards a productive bilateral relationship,” the US State Department had said in a statement.

He was reported to have “raised the importance of Pakistan taking decisive action against all terrorists operating in Pakistan and its vital role in promoting the Afghan peace process.” While Foreign Office Spokesman Mohammad Faisal denied that the issue of terrorism had been discussed at all.

“Pakistan takes exception to the factually incorrect statement issued by US State Dept on today’s phone call btwn PM Khan & Sec Pompeo,” he said in a tweet.

“There was no mention at all in the conversation about terrorists operating in Pakistan.” But Nauert later stuck by her original statement.

Washington has pressured Pakistan for years to crack down on the branches of militants allegedly operating in the country, both of which have been designated as terror groups by the United States. Pakistan has categorically denied the accusations.

Ties with the US worsened in January when President Donald Trump accused Pakistan of providing ‘safe havens’ to terrorists, suspending military assistance worth hundreds of millions of dollars.

The Times of India writes that “the Pompeo mission will also help Washington and New Delhi coordinate their objectives and mission in Afghanistan”.

Back on August 14, on country’s Independence Day, Pompeo, in his message to Pakistani nation, had said he hoped to further strengthen ties between the two nations.

Pak-US relations have taken a backtrack after the Pakistan Foreign Office rejected a statement by the US State Department regarding the contents of a phone call between Pompeo and PM Imran Khan last week.

“Pakistan takes exception to the factually incorrect statement issued by US State Dept on phone call between PM Khan & Sec Pompeo. There was no mention at all in the conversation about terrorists operating in Pakistan,” FO spokesperson Dr Faisal tweeted.

He also asked the US to “immediately correct” the statement.

The US State Department, however, indicated there would be no correction in response to Pakistan’s complaint.

PM Imran is well known for his criticism of US military policy in Afghanistan, but he said after winning elections that he seeks better relations with the United States after a series of aid cuts and the suspension of US military training.