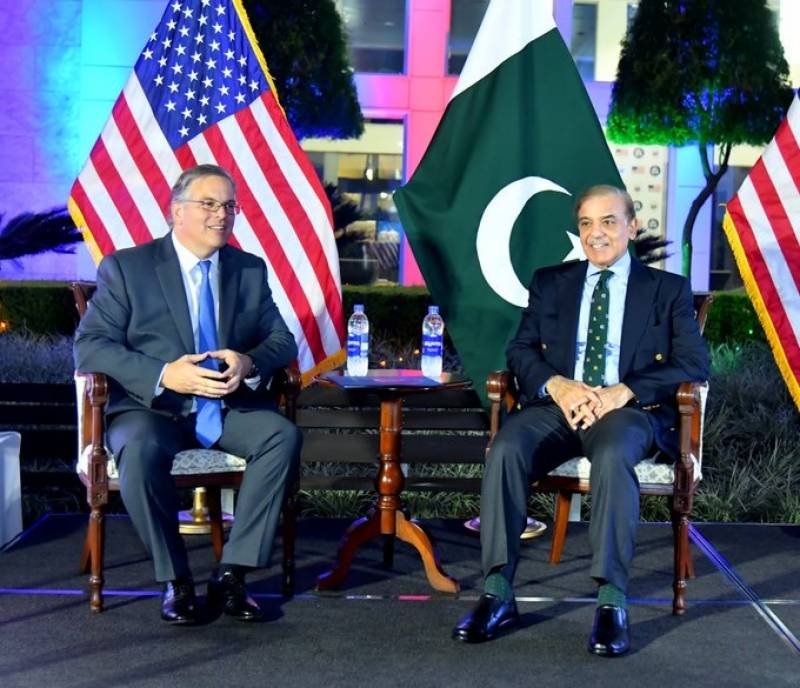 ISLAMABAD – Prime Minister Shehbaz Sharif on Thursday attended a ceremony organised by the US Embassy to mark the completion of the 75th anniversary of the establishment of diplomatic relations between the two countries.

Addressing the ceremony, the premier vowed to strengthen the bilateral ties between Islamabad and Washington.

At the outset of the event, participants observed one-minute silent to show solidarity with flood-hit people of Pakistan.

PM Shehbaz Sharif also held a meeting with US Ambassador Donald Blome to discuss the matters of mutual interest.

Blome in a statement said: “Our 75-year partnership is visible throughout Pakistan. Decades of assistance supported construction of schools, hospitals & highways”.

“Pakistanis studied in the US & returned to key roles in business & government. We are one of the largest sources of foreign investment.”

"There's also a long history of humanitarian work that binds our countries. We’ve given $66M+ in flood assistance so far, including $10M recently announced by @SecBlinken. We're doing what friends & partners do – support each other when it is most needed," the US ambassador said.

"Given our long history of cooperation & shared ambitions, this reframed relationship is more urgent & valuable than ever. As we look forward to the next 75 years & beyond, I hope you will join me in opening this new door."