Israeli Minister makes an unprecedented call to yet another muslim state
29 Oct, 2018 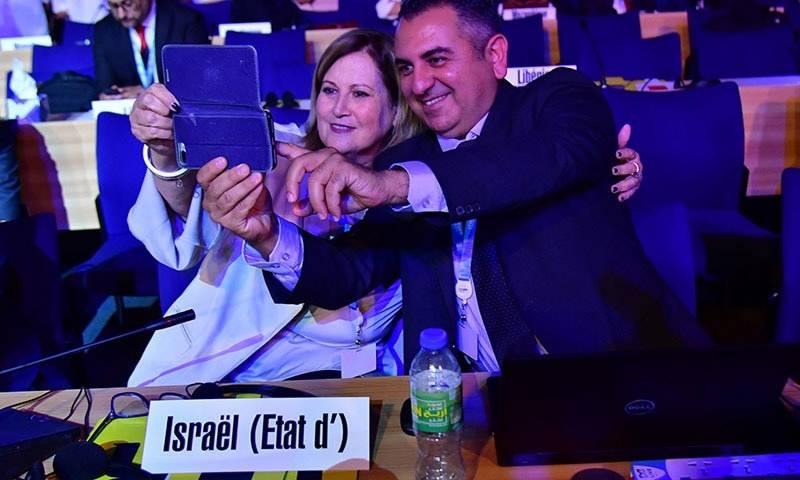 DUBAI - Israeli minister Miri Regev on Monday shared a video on Facebook of her touring a famed mosque in the United Arab Emirates, in an unprecedented visit by a cabinet member.

The culture and sport minister, known for controversial comments about Arabs, was dressed in a red *abaya* with a white scarf covering her hair at Abu Dhabi's Sheikh Zayed Grand Mosque.

"I toured the site," Regev told the camera, in Hebrew, surrounded by a group of people in traditional Emirati dress.

"This is the first time that an Israeli minister is here on a visit.

Regev, a member of Prime Minister Benjamin Netanyahu's right-wing Likud party, visited the mosque on Sunday, according to her spokesman.

Her country does not have diplomatic relations with the UAE.

Israeli officials publicly toured landmark sites in the UAE at the weekend, the first such visit, days after Netanyahu travelled to the neighbouring Gulf state of Oman.

The delegation, which includes the country's communications minister, was in Dubai for the International Telecommunication Union Plenipotentiary Conference this week.

"We arrived the day (Sunday) before the conference. We went around the town, and we visited the mall," a member of the delegation told *AFP*.

"We were impressed, and we didn't expect the town to be like this, this beautiful," she said on condition of anonymity.

The visit came a day after Israel's national anthem was played at a judo tournament in Abu Dhabi after one of its athletes won gold — believed to be the first time the anthem has been played publicly in an Arab Gulf state.

Netanyahu visited Oman on Thursday for talks with the country's ruler, Sultan Qaboos, on regional security issues, according to official statements by both countries. And at a cabinet meeting on Sunday, Netanyahu said of his Oman visit: "There will be more".

Israeli Transportation Minister Yisrael Katz is scheduled to visit Oman next week for a transportation conference, according to his office.

Netanyahu has long sought a rapprochement with other Arab states, citing in part concerns over their common enemy Iran.

But Israel currently has full diplomatic relations with only two Arab states, Egypt and Jordan, as Israel's occupation of Palestinian territory remains a major obstacle to official recognition by Arab countries. - APP/AFP