Pakistan strongly responds over the Missile attack against Saudi Arabia

Ms. Sharif, 44, leapfrogged several influential relatives to emerge in recent months, along with her uncle, as a possible long-term heir to the leadership of the country’s dominant political force: the Pakistan Muslim League, long headed by her father, Nawaz Sharif, a three-time prime minister. She has been known for years as one of her father’s closest advisers, but more recently she has taken a much more public role in the party’s leadership.

When Mr. Sharif was forced to resign from office over corruption charges in July, she became the family’s public face of defiance, harshly criticizing Pakistan’s unelected power players, the military and the judiciary. And in the weeks after, she helped organize her mother’s victory in the important by-election for Mr. Sharif’s vacated seat in Parliament.

But the same corruption case that helped bring her father down has dragged her into court, too — accusations about the purchase of luxurious London properties with offshore money, detailed in the Panama Papers leak. An accountability court opened criminal proceedings against her, her father and her husband this month that could end with them all barred from holding public office and imprisoned.

But Ms. Sharif insists that the evidence to send her to prison is “missing” and that the victory in the September by-election was evidence that people still stand by her and her party. Since the indictment, she has continued to hold public meetings and visit development projects.

“The cases are politically motivated and nothing more than blatant political victimization and pressure tactics,” Ms. Sharif said in a recent interview. “People remain undeterred, and support for the Pakistan Muslim League has further galvanized.”

It was a characteristically confident statement from Ms. Sharif, who says that her family’s resilience has been hardened by decades spent as the target of political rivals and Pakistan’s powerful military establishment.

As peacocks and reindeer strutted on the lawns of the 700-acre Sharif family estate in Lahore, she described how Pakistani soldiers physically dragged her father from office in a coup in October 1999 and the ensuing years of exile in Saudi Arabia for her and more than 20 other members of her family. 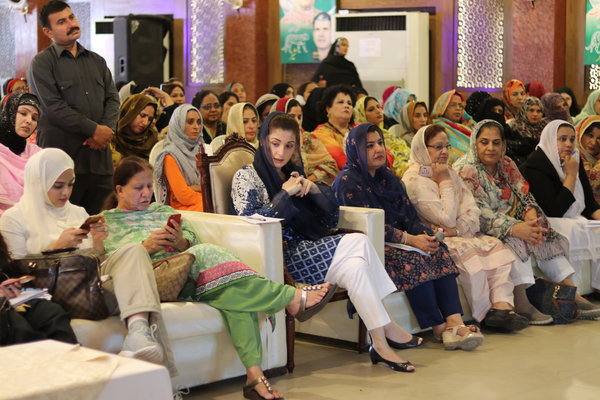 “I am undeterred, unperturbed, fighting,” she added, constantly clicking on a diamond-and-sapphire prayer counter.

Even before her relatively recent step into a more public role at the top of the family’s party, she had been a player in Pakistan’s political scene. She has assembled a growing team of loyalists and promoted them within the Pakistan Muslim League and the government.

She hesitated to directly address whether she had ambitions to become prime minister, saying it was her family’s decision that she take the party’s reins.

But at least two of her father’s aides have decided not to support her efforts to play a leading role in the party, and within the Sharif family she has been criticized by her uncle Shehbaz Sharif — himself a powerful political player and three-time chief minister of Punjab — and his children.

Until 2012, Ms. Sharif had quietly managed the family’s philanthropic Sharif Trust, rising to political prominence only when she helped run her father’s re-election campaign in 2013. Since then, she has managed to sideline her cousin Hamza Shehbaz, long considered a potential standard-bearer, who is now conspicuous by his absence from rallies and party meetings.

In a first for a family that has always maintained a united public front, Hamza Shehbaz admitted in a recent TV interview to political differences with Ms. Sharif and expressed hope that he would be able to bring Nawaz Sharif around to his point of view.

One of Nawaz Sharif’s closest aides, Riaz Pirzada, said in a news conference after the indictment last week that Shehbaz Sharif should take over the party until his elder brother is free of his legal troubles. Another close aide, Chaudhry Nisar Ali Khan, has said he could not accept Ms. Sharif as a party leader, and he is no longer in the cabinet.

But Ms. Sharif insists that rumors of infighting are overblown.

“It’s not a divided house,” she said as she prepared to address polling agents in the heart of Lahore’s Old City. “The Sharif family takes a lot of pride in family values and the family ethos.”

About her uncle Shehbaz Sharif possibly becoming prime minister, she said: “He’s the most competent person. He’s my hero. I love him to death.” 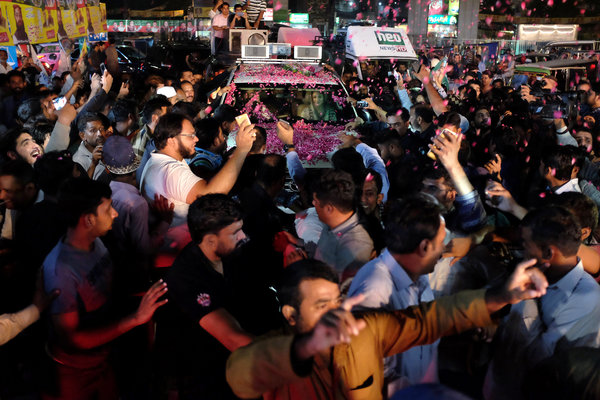 Clearly, the very real external threat posed by the court cases against her and her family have overtaken internal intrigue for the moment. But there is also widespread skepticism that the courts will reach a decisive verdict against them. And even if she and her father are unable to run in elections in the future, their party still has a powerful hold on critical electoral regions.

As for her personal role, Ms. Sharif says that the political chapter of her life has been a recent one. She described her upbringing as relatively traditional, and said that for a long time she “never saw herself in politics,” in a family in which political leadership had long been a man’s game.

She said her childhood was filled with singing and playing the piano. She was educated at the Convent of Jesus and Mary in Lahore, dropped out of medical school and finished a master’s degree in literature at the University of the Punjab.

At 19, she married the man who had served as the military’s attendant to her father in his first stint as prime minister, Muhammad Safdar. The couple have three grown children, and Ms. Sharif says she feels lucky to have married young.

“I gave all my time to my kids when they were growing up,” she said. “Now, I am independent. I have more time for myself, for my work. I could not be doing all this today if I still had small children.”

She is frank about enjoying the finer things in life — designer handbags, expensive jewelry — even as the family’s taste for luxury stands at the center of the corruption allegations.

She says it was her grandfather who first recognized her administrative and political potential and appointed her to important positions in the family’s operations. Over the years, she said, her father, too, came to appreciate her abilities. Today, she says, one of her most important skills is the capacity to convey advice and criticism to her father, a man who stubbornly refuses it from others, occasionally persuading him to change his mind.

“People around me tell me I was meant for a certain role,” she said when asked whether she ever saw herself as a future prime minister.

She climbed into the passenger seat of her car, and as supporters began closing in along its path, she dutifully flashed “thumbs up” signs for them.

“I don’t know what tomorrow holds,” she said. “But I think I owe it to the people. I need to reach out to them.”