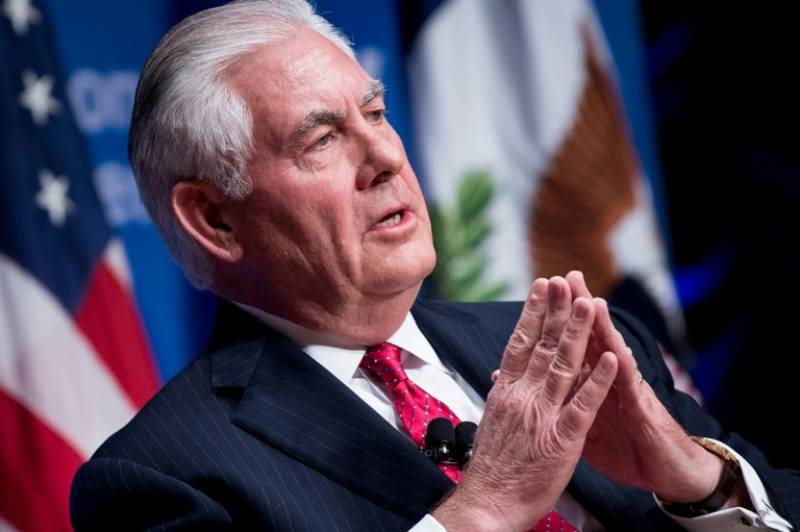 Washington: Secretary of State Rex Tillerson re-committed the United States to opposing Moscow's "aggression" against its neighbors Tuesday and vowed to help Europe wean itself off Russian oil and gas.

Next week Washington's top diplomat will attend ministerial meetings of the NATO alliance in Brussels and the Organization for Security and Cooperation in Europe (OSCE) in Vienna.

At both sets of talks Russia's intervention in Ukraine will top the agenda and US allies in Europe will be looking for reassurance that President Donald Trump's administration has their back.

Trump came to office this year seeking warmer ties with Moscow and has sometimes called into question the value of US alliances, but relations with President Vladimir Putin's Kremlin quickly soured.

Now, Tillerson is heading to Europe with a tough message that the Western allies stand shoulder to shoulder to oppose "the enemies that threaten our security and oppose our way of life."

In a major speech on US relations with Europe under Trump's "America First" foreign policy, Tillerson pledged that sanctions against Russia will remain in place until it helps restore peace in Ukraine.

And he argued that attempts by two previous US administrations to thaw ties with Moscow had only led to Putin seizing the opportunity to invade Georgia in August 2008 and Ukraine in 2014.

"Any resolution to the war that does not entail a fully independent, sovereign territorially whole Ukraine is unacceptable," Tillerson told an audience of policy-makers, scholars and reporters.

"Russia chose to violate the sovereignty of the largest country in Europe... Our trans-Atlantic unity is meant to convey to the Russian government that we will not stand by this flagrant violation of international norms," he said.

And Tillerson warned that the US and European Union economic sanctions which Moscow has lobbied so hard to overturn "will remain in place until Russia reverses the actions that triggered them."

Before coming to office as Trump's secretary of state, Tillerson was chairman of US oil giant ExxonMobil, pursuing major investments in Russia, and an influential opponent of economic sanctions.

But once in government he was confronted by Putin's intransigence over Ukraine and the Kremlin's determined military support for Syria's brutal strongman Bashar al-Assad and his Iranian allies.

US intelligence has also concluded that Russian agencies attempted to interfere in the American presidential election to tilt it in his favor over Democratic rival Hillary Clinton.

Trump furiously denies any collusion with Kremlin agents, but Congress and a special prosecutor are investigating meetings between figures in his campaign and Russians lobbying against sanctions.

Moscow is also suspected of meddling in politics in several European countries, and authorities are investigating alleged links to populist movements and support for Brexit and Catalan separatism.

In addition to stepping up US spending on military readiness in eastern Europe, including in Ukraine, Tillerson said Washington would help reduce Europe's need for Russian oil and gas.

Speaking at the Woodrow Wilson International Center for Scholars, he said US money and know how would help Croatia and Poland build liquefied natural gas terminals and Greece and Bulgaria lay a pipeline.

"The Ukraine crisis also made clear how energy supplies can be wielded as a political weapon," he warned, vowing to help prevent big suppliers like Russia from "extorting" clients in Europe.

And he spoke out against the Nord Stream 2 project to pipe Russian gas westwards under the Baltic and the parallel Turkstream plan in southeast Europe, both funded by Russian energy giant Gazprom.

These pipelines, said Tillerson -- who once ran ExxonMobil's Russian subsidiary Exxon Neftegas and has a medal of friendship from the Kremlin -- are "unwise, as they only increase market dominance from a single supplier to Europe."

The NATO foreign ministers meeting will be held in Brussels on Tuesday and Wednesday next week, and the 24th OSCE Ministerial Council on Thursday and Friday in Vienna.