PML-N is the biggest champion of freedom of press in Pakistan: Ahsan Iqbal
29 Nov, 2017 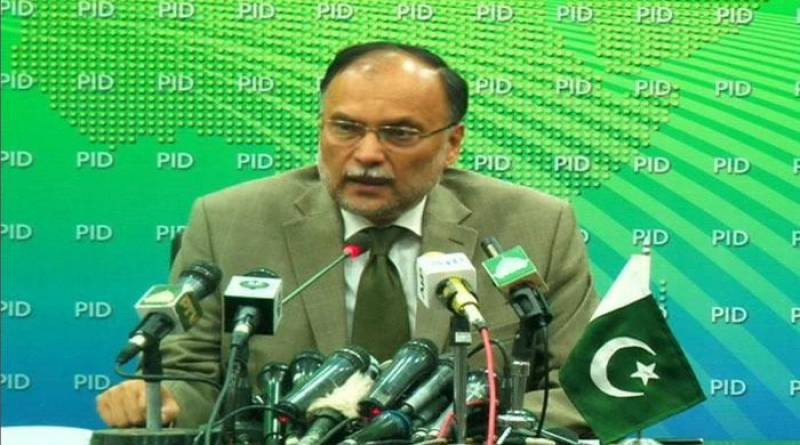 ISLAMABAD: Interior Minister Ahsan Iqbal on Wednesday said that the ruling party was forced to impose a restriction on the media during the operation against protesters of a religious party.

“No one is a bigger champion of freedom of expression than Pakistan Muslim League – Nawaz (PML-N),” Iqbal said. “The unfortunate step of blocking channels was according to Pakistan Electronic Media Regulatory Authority’s (PEMRA) code of conduct which forbids live coverage of security operations.”

Responding to a question, Iqbal said that the government had also called a meeting with the Pakistan Broadcasting Association the very next day [after media restrictions were imposed], but due to traffic blockages in Karachi, most members could not attend the session.

Discussing the energy problems of the country, the interior minister claimed that out of the 10,000MW of electricity that the PML-N had promised, 7,000MW has been energized.

“This is a 42 percent increase from what was being generated in 2013 when we came to power.” “In accordance with CPEC, Rs27 billion worth of projects have been energized,” he said. “This is the future towards which we are taking Pakistan.”

Addressing the recent controversy of the changed contents of a form regarding belief in Khatm-e-Naboowat (finality of Prophethood) — required to be signed by public office holders and election candidates — drew a backlash from the opposition benches and religious parties, Iqbal claimed that Imran’s party was part of the committee that drafted the elections bill.

“Imran was a member of the 34-member committee which drafted the law and four members of his party were part of it too,” said Iqbal.

“All members of the committee gave different suggestions but PTI members, as per the Senate record, did not make any demands to change back the Khatm-e-Naboowat clause,” he said.

“The then law minister Zahid Hamid supported Hafiz Abdullah’s observation that the clause should be brought back to its original form but out of the 13 votes in favour of this suggestion, not even one was from PTI members.”

“Mr Khan you are trying to cheat the nation and the nation won’t be fooled so easily,” Iqbal said. “Unfortunately, we are becoming part of the enemies’ schemes to spread sectarian violence.”

“The reality is that all the corrupt politicians are now under the umbrella of PTI.”

Iqbal insisted that the situation in Pakistan demands that the nation maintains enduring peace in the country and deny anyone the chance to spread strife in the country.

“Unfortunately, we are becoming part of the enemy’s agenda to make the Muslims of Pakistan fight against each other,” he said. “A conspiracy is being hatched to make Muslims fight against Muslims.”

Referring to the operation to disperse the protesters at the Faizabad interchange in Islamabad, Iqbal said that the civil and military leadership, together, took the decision.

The minister claimed that the government had information that sectarian conflict could have flared up in Pakistan had the operation not been conducted.

“We all need to unite and focus on denying the enemy any chances of creating strife in Pakistan. We all need to safeguard the country.”