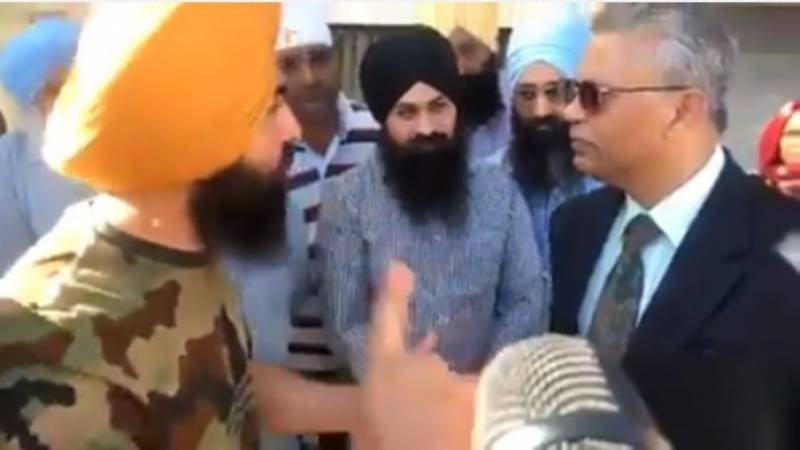 The Indian High Commissioner A M Gondane was refused entry into a Sikh temple in Melbourne over the weekend, amid loud protests, reports an Australian media.

Gondane had travelled from Canberra to Melbourne on an official visit and was scheduled visit the Gurdwara Sahib Tarneit at 8am on Saturday (Nov 18), according to SBS Punjabi.

Quoting unnamed sources, the report said Gondane himself had sought the visit, since he was keen to visit religious places in the area which boasts of a very dense Indian population. However, he was accosted at the entrance by a group of protesters, who argued with him for a long time at the entrance to the Gurudwara.

In one video shared via the social media, viewed by Asia Samachar, one protester was heard saying: “You’re welcome to mehta thek (pay respect) at the gurdwara, you can partake langgar, but come as an individual, and not an official of the Indian government.”

Gunwant Kaur, the secretary of the gurdwara management committee told SBS Punjabi, “This was an extremely unfortunate incident.”

“There was a group of around 25-30 protestors, who had begun arriving at the venue from 7.15 am onwards. They were very loud and aggressive, and had surrounded the Indian Consul General Manika Jain, who had arrived earlier.”

“They created quite a scene and crossed all limits,” she said, adding “they were extremely disruptive and were trying to intimidate the Gurudwara committee members as well.”

The report added a video capturing all of this has emerged on social media, in which a few protestors are seen arguing with the High Commissioner AC Gondane, telling him that he could enter the gurudwara premises as an individual “but not as a representative of the Indian government.”

Speaking to SBS Punjabi, one of the protesters Harkirat Singh Ajnoha said: “We were protesting the arrest of 47 Sikh youths in Punjab in recent times, the latest example being the arrest of Jagtar Singh Johal who was in India for his own wedding.

“We want to raise awareness about the human rights violations in Punjab and recognition of the Sikh genocide.”

To this point, Gunwant was quoted as saying: “There are much better ways to protest. This is certainly not the way. These people didn’t behave like Sikhs are meant to, and have brought a bad name to the entire community.”