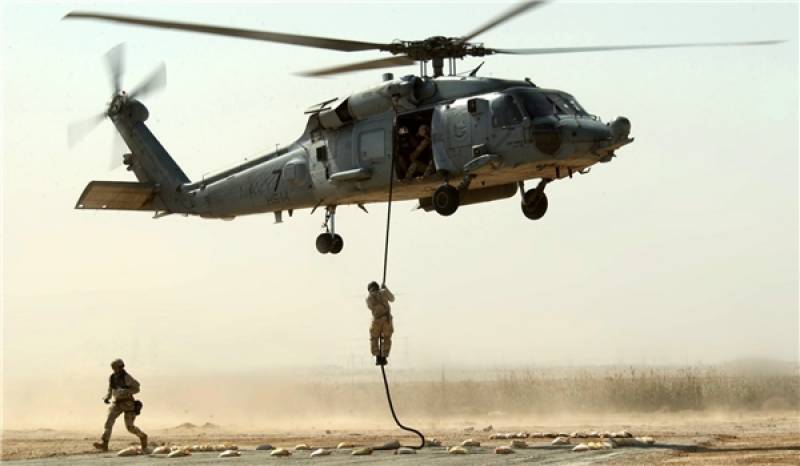 DUBAI - The US military forces continued heliborne operations to rescue the ISIL terrorists in Western Iraq near border with Syria, a media outlet reported on Sunday.

The Arabic-language al-Watan daily reported that the US army aircraft transferred a number of ISIL terrorists from Tal Safouk region near Iraqi's border with Syria.

In the meantime, Asia News reported that ISIL terrorists stormed several positions of the Iraqi popular forces of Hashd al-Shaabi in Tal Safouk.

It further said that the US helicopters landed on Tal Safouk and transferred a number of ISIL terrorists to an unknown destination.

Field sources reported that an American personnel-carrying helicopters flew from Southern Hasaka towards Hasaka Central Prison and landed in the prison that is now used as a US-run military base.

On Wednesday, the US forces conducted four more airborne operations in Southeastern Hasaka to rescue a number of entrapped ISIL terrorists, a move done repeatedly by the American forces to provide back up for the terrorist group in Eastern Syria.

The US military forces are carrying out airborne operation in ISIL-held regions once in a while.

On Monday, Russia's airbase in Lattakia province, known as Humeimim, complained that Washington supported the ISIL terrorists through the US-backed Syrian Democratic Forces, as the SDF continues pressures against civilians in Deir Ezzur.

Humeimim announced that it gained field reports disclosing that Washington is indirectly supporting and equipping the ISIL terrorists.

It added that Washington supports the ISIL through its illegally created allies, the SDF forces, who pursued disintegration of Syria.

Meantime, local sources in Deir Ezzur reported that the SDF forces detained tens of civilians in the province, including women, children and the elderly, en route from Damascus to the region and prevented their move to the province.