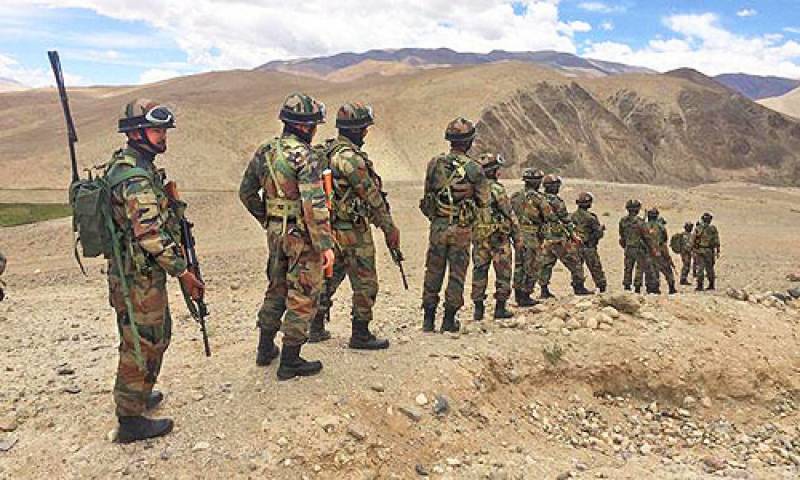 ISLAMABAD: The Indian Army may be busy with the volatile situation along the 778-km Line of Control with Pakistan, but it is slowly and steadily building requisite deterrence along the 4,057-km Line of Actual Control with China, The Times of India has reported.
The 1.3-million Army has now kicked off the process to raise thesecond division of the new mountain strike corps for the `northern borders’ with China despite an ongoing fund crunch, while it is also planning a high-altitude warfare exercise in Ladakh later this year.
Defence sources said the new 72 Infantry Division, with its headquarters in Pathankot, will become “fully operational” in three years.“The division will now be raised with one brigade in the beginning. But it will have three brigades when it is fully formed and operational in around three years,” said a source.
The Army had formally begun to raise the new 17 Mountain Strike Corps in January 2014 to acquire “quick-reaction ground offensive capabilities” for the first time against China because its existing three `strike corps’ were largely geared towards Pakistan.
The 17 Corps, with two new high-altitude infantry divisions as well asarmoured, artillery , air defence, engineer brigades spread from Ladakh to Arunachal Pradesh, will be fully formed with 90,274 soldiers at a cost Rs 64,678 crore by 2021. “All adversaries respect strength, which comes from having the capability to strike across the border,” Army chief General BipinRawat had earlier told ToI.
Along with the Agni series of nuclear-capable ballistic missiles, andbacked by the deployment of additional fighter jets, tanks, conventional BrahMos supersonic missiles and the like in the Northeast, the 17 Corps is part of the overall plan to achieve “credible de terrence” against the People’s Liberation Army (PLA).
China, incidentally , has reorganized its 2.3-million PLA into fivetheatre commands to crank up its offensive capabilities as well as establish better command-and-control structures. Its western theatre command now handles the entire LAC with India instead of the earlier Chengdu Military Region in the east and the Lanzhou Military Region towards the north, as was reported by ToI.
Under the new 17 Corps, the 59 Infantry Division was the first to beraised at Panagarh in West Bengal. “With the 59 Division now almost fully operational, the focus now is on raising the new 72 Division. Initial planning for the 17 Corps to hold its first exercise in Ladakh in August-September is also now underway,” said the source.
The Army , however, has struggled to raise the 17 Corps, which envisages as many as 30 new infantry battalions and two Para-SF units, often cannibalizing from its critical war wastage reserves (WWR) in the absence of dedicated funding. Another big problem has been the tardy pace of infrastructure development along the LAC.

Only 24 of the 73 all weather roads identified for construction along the LAC well over a decade ago, for instance, have been completed till now.