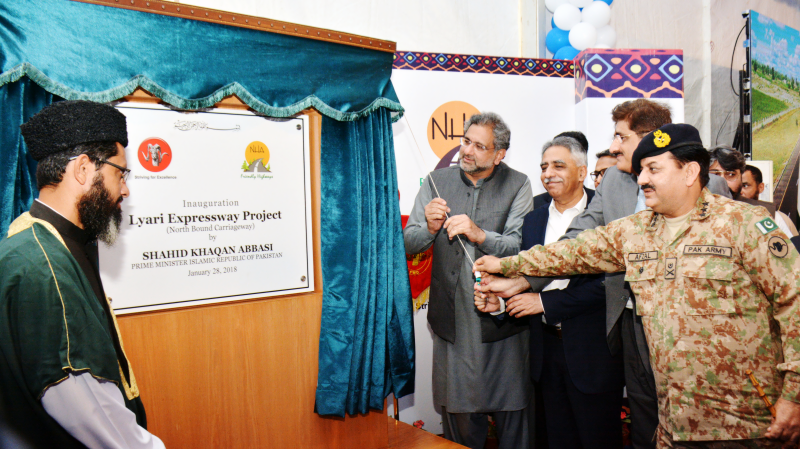 Prime Minister Shahid Khaqan Abbasi says CPEC projects and motorways will bring progress and prosperity in the country as well as region.

He said this while addressing a ceremony after inaugurating North Bound Carriageway of Lyari Expressway in Karachi on Sunday.

The Prime Minister said enhanced connectivity will augment economic activities across the country.The 38-killometer long project, consisting of twenty bridges and four interchanges, has been completed at a  cost of ten billion rupees.

Shahid Khaqan Abbasi said the project faced many difficulties in its completion but now it has been completed with firm commitment.He said that work on M-9 Motorway project is in final phase and it will also be completed soon.

He said the PML-N government believes in development of infrastructure and all development projects will be completed in Karachi and elsewhere in Sindh province.

Shahid Khaqan Abbasi said 25 billion rupees have been provided by the federal government for completion of projects in Karachi to resolve problems being faced by the people.

He said all were united to resolve Karachi issues and linked its development with the rest of the country without which the country could not achieve progress and prosperity.

The Prime Minister said 1700 kilometer long motorways are being built in the country.He said development process should be above politics and it should continue.

The Prime Minister said democratic system in the country would continue and the electorate would decide about the formation of new government in the upcoming general election to be held in July.

He said Lyari Expressway will provide easy access to traffic from port to Super Highway.

Chairman National Highway said that the authority added 2300 kilometers of road network in the existing 580 kilometers motorways and highways in the country.

Prime Minister Shahid Khaqan Abbasi has assured every possible cooperation for maintaining law and order in the province including Karachi.

Talking to Governor Sindh Muhammad Zubair who called on him in Karachi on Sunday, Prime Minister also assured the assistance to the Sindh Government for development of infrastructure.

Overall situation of the province and development projects  were discussed on the occasion.Issues pertaining to trade and business activities in the province also came under discussion.

Chairing a high-level meeting on law and order situation in Karachi, Shahid Khaqan Abbasi said law and order is top most priority of the government and federal government will continue its cooperation with Sindh government in this regard.

He said peace in the province particularly in Karachi has been restored because of sacrifices rendered by law enforcement agencies.

Prime Minister stressed the need of better coordination among federal and provincial organizations for maintaining law and order. Progress made so far in the Karachi operation was also reviewed in the meeting.