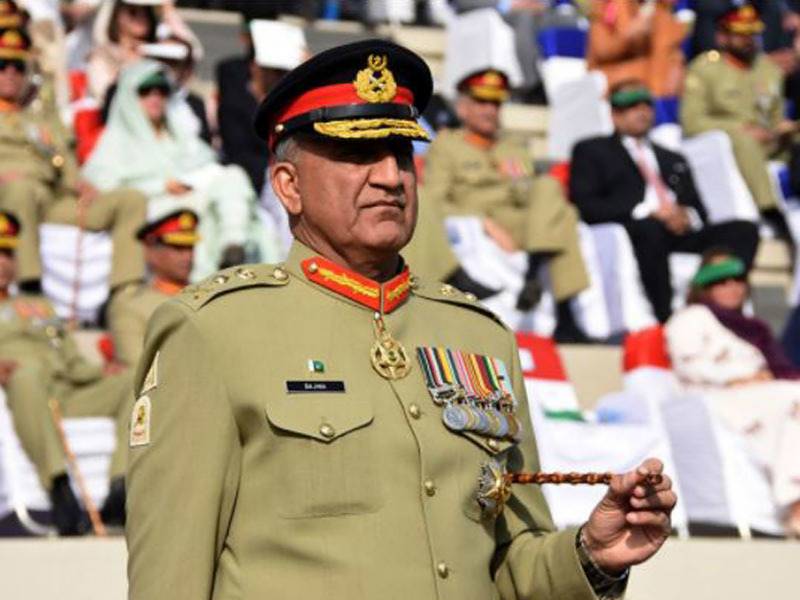 ISLAMABAD: The new chief of Pakistan's army had a tough act to follow when he took the baton of command in November 2016. His predecessor had been a widely popular figure, credited with dramatically curbing both attacks by militants against civilians and political corruption and extortion. There was apprehension that the army's next leader could never match these successes and might struggle to exert control.

But since assuming what is considered the most powerful position in the country, Gen. Qamar Javed Bajwa has left no doubt about who is in charge. A little more than a year after he took command, there is already talk in the country of the "Bajwa Doctrine," with Pakistan's approach to foreign and domestic policies reflecting the army chief's vision.

Bajwa has served during a time of great political upheaval, even by the tumultuous standards of Pakistan. He was chosen as army chief by the prime minister at the time, Nawaz Sharif <link>, with a critical factor in his selection being the general's strong support for friendlier ties between the military and civilians.

But Sharif was ousted by the Supreme Court over corruption charges, in a controversial decision in July.

Then, this month, the Trump <link>administration announced it would suspend nearly all security aid to Pakistan, an across-the-board freeze that is the most tangible sign yet of Washington's frustration with what it sees as the country's refusal to crack down on terrorist networks operating there.

The decision, which could affect as much as $1.3 billion in annual aid, came three days after President Donald Trump complained on Twitter that Pakistan had "given us nothing but lies & deceit" and accused it of providing "safe haven to the terrorists we hunt in Afghanistan."

Statements from the Pakistan army's media wing have described Bajwa as being outspoken in conversations with US generals and government officials. In a call this month with Gen. Joseph L. Votel,head of the US Central Command, for example, Bajwa talked of a "sense of betrayal" within the country over Trump's tweet, the army said.

The relationship between Pakistan and the United States has been one of "allies with an up and down history," said Maj. Gen. Asif Ghafoor, spokesman of the Pakistani military.

Since the announcement from the Trump administration, Bajwa has stressed that Pakistan will not seek the resumption of US security aid and that the country is not dependent on it. Since last year, he has been reaching out to countries like China, Iran, Qatar, Russia and Saudi Arabia — building contacts that could help him cement his grip on power and reduce Pakistan's reliance on the United States.

In the view of the Pakistan military, both Bajwa and his predecessor, Gen. Raheel Sharif, can point to victories against militants who have attacked the country's civilian population, which has increased the army's popularity.

Raheel Sharif during his tenure "cleared leftover strongholds of terrorists in northwestern Pakistan," Ghafoor, the military spokesman, said. "General Bajwa is taking it forward to enduring peace and stability not only in Pakistan, but the region as well."

Bajwa is also pursuing fencing along the 1,685-mile length of the Pakistan-Afghanistan border <link> to help curb cross-border movements by militants. And he has pushed for the repatriation of Afghan refugees to keep militants from hiding in the country by mingling with refugees in settlement camps.

And Pakistan, Ghafoor said, "remains committed to continue contributing all efforts to bring peace in Afghanistan and understands US concerns."

On the domestic front, critics say Bajwa is essentially following the same institutional policies that have made the military an overarching influence in the country.

"For the last 1 1/2 years, civilian-military ties have hit their lowest ebb," said Zahid Hussain, a widely read political columnist and analyst. "The army is now much more assertive. It has greatly increased its clout."

Since being removed from the prime minister's office, Nawaz Sharif has gone on a political offensive. He has drawn enormous crowds at public rallies and, in sometimes veiled and sometimes not-so-veiled references, has accused the judiciary and the military of hatching a conspiracy to remove him from office.

The military has denied accusations that it is behind Sharif's removal, but allegations of the military's intelligence agencies meddling in politics continue to surface.

Recently, Shahid Khaqan Abbasi <link>, a Sharif loyalist who succeeded him as prime minister, hinted at the role of intelligence agencies in forcing the resignation of an ally of Sharif from the post of chief minister of Baluchistan province in the country's southwest.

There is speculation within the governing party, the Pakistan Muslim League-Nawaz, that the military will not allow a level playing field in the next general elections, which are five months away. There are also worries that the vote may be delayed.

Ghafoor, the military spokesman, played down the fears of a disruption of the coming vote. "Democracy is the way forward," he said. "Elections should take place on time."

Hussain, the political columnist, echoed that sentiment, saying fears of a coup or delay in elections were exaggerated. "I don't see any derailment of the democratic process," he said.

One of the country's leading opposition politicians, and a bitter foe of Sharif, raved about the job the new army chief has done.

"I have more praise for General Bajwa than General Raheel Sharif," the opposition politician, Imran Khan, said at his political office in the suburbs of Islamabad. "Never has an army chief so openly supported democracy."

Khan, a contender to be Pakistan's next prime minister, said Bajwa had doubled down on his predecessor's efforts to curtail militant violence and political corruption.

As an example, Khan pointed out that there had been suspicion among the business community of Karachi, the country's commercial hub, that actions started by the former army chief against criminal political gangs and extortionists in the city might come to a halt. "But there has been no letup," Khan said.

The relationship between Nawaz Sharif and Bajwa fractured in the spring over leaks to the news media of a meeting at which Pakistan's civilian leaders confronted the military over its alleged reluctance to fight Islamic militant groups in the country.

And with Sharif continuing to speak out since leaving office, the military appears in no mood to repair the rift with the still highly influential politician. "Nawaz Sharif still has a lot of say," said Hussain, the columnist. "And the anger against him within the army is greater than before."

The army chief is said to have a better working relationship with Abbasi, Sharif's successor.

"There has been much more institutional contact between Prime Minister Abbasi and General Bajwa," Hussain said. "Unlike under Nawaz, when there was a complete breakdown in institutional decision-making."

"But this is not to suggest that there is no friction," Hussain added. "The army is in a much stronger position now."