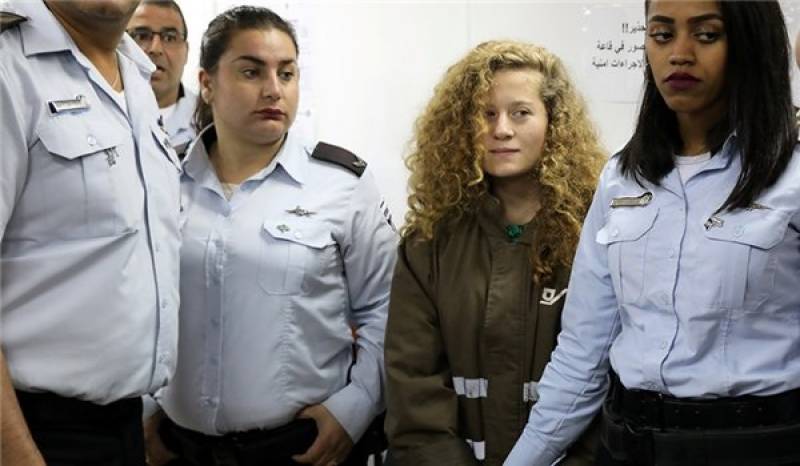 TEHRAN - Over 40 organizations will rally at New York’s Penn Station on Tuesday to demand the release of Ahed al-Tamimi, the 16-year-old Palestinian girl held in Israeli military detention since Israeli forces raided her home in the West Bank village of Nabi Saleh in mid-December.

"We must demand the release of Ahed Tamimi, who is held in Zionist captivity paid for by US tax dollars that funded the soldiers who harassed and shot her family in the first place," Nerdeen Kiswani of New York City Students for Justice in Palestine said, WAFA reported.

"The US played a part in starting this, so we must play a part in ending it," Kiswani added.

The demonstration is part of a series of worldwide actions marking both Ahed's 17th birthday on Wednesday, January 31, and the start of her Israeli military trial, scheduled to begin at Israel's Ofer prison the same day.

Tamimi’s family, however, asked the court to defer the trial date to February 6 when the court is supposed to hear the case against Tamimi’s mother, Nariman, who was also detained on the same day as her daughter when she went to inquire about her at Benyamin detention center.

"At least 40 gatherings over a week, including 14 on Tuesday alone, will call for Ahed's release," US coordinator of Samidoun: Palestinian Prisoner Solidarity Network Joe Catron stressed, adding that "Her imprisonment by Israeli occupation forces has ignited a strong global campaign and reinvigorated the overall movement to liberate Palestine."

An Israeli military judge has ordered mid-January the Palestinian teenager held in custody until trial.

“I found no alternative other than to order her detention in custody until the end of proceedings,” the judge ruled, saying “The gravity of the offences of which she is accused do not allow an alternative to custody".

Ahed was arrested by Israeli forces during a predawn raid on her home in the village of Nabi Saleh, located in the central occupied West Bank.

Tamimi’s cousin Nour was also arrested. Her mother Nariman Tamimi was detained as well, when she went to the police station where her daughter was being held.

Ahed, whose family is well-known internationally for their activism against the Israeli occupation, became the latest face of Palestinian resistance when footage emerged of her slapping one and then another fully-armed Israeli officer in the face during a protest in her home village of Nabi Saleh, near the Palestinian city of Ramallah.

She is well-known across Palestine and the Arab world for videos of her, since her childhood, defiantly resisting Israeli soldiers who clash with Palestinians in her village nearly every week.

An Israeli soldier shot Ahed Tamimi’s brother Mohammad, 14, in the head during a demonstration, while he has been released from the hospital after undergoing surgery and a medically induced coma.

The Tamimis have long been targeted for their activism. In 2011, an Israeli soldier fired a tear gas canister from closer range at Mustafa Tamimi, killing him.