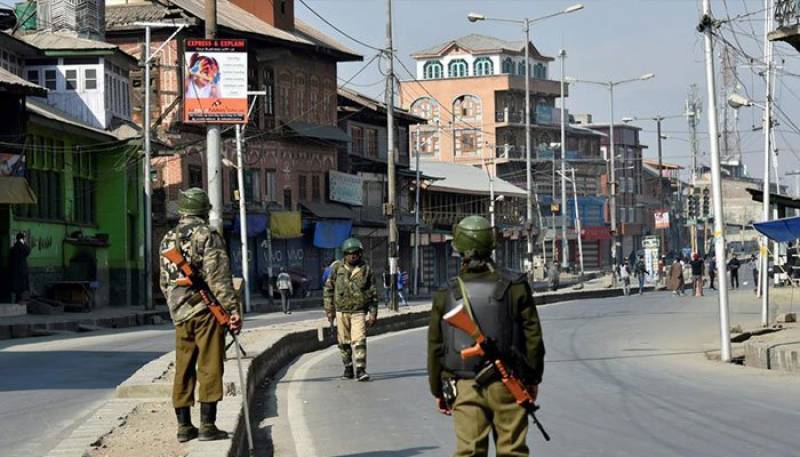 SRINAGAR: Police in Indian held Kashmir registered an FIR against the Indian army with murder, attempt to murder and endangering life charges over the killing of two civilians in the occupied Shopian district on Saturday, Indian media reported on Sunday.

Javid Bhat and Suhail Lone, both in their 20s, were killed when army opened fire on protesters in Ganaupora village in south Kashmir’s Shopian district. Meanwhile, another youth, who sustained bullet injuries, is battling for his life at the Sher-I-Kashmir Institute of Medical Sciences in Srinagar.

A senior police officer confirmed that an FIR (26/2018) was filed at the Shopian police station against the army’s 10th Garhwal unit. “The charges under sections 302, 307 and 336 are pressed,” the officer said.

Eyewitness disclosed that the Indian forces opened fire after an altercation ensued over the security personnel’s attempt to remove posters of a martyred freedom fighter, Fareed Ahmed, in the village. Ahmed was killed in an encounter in south Kashmir on January 24.

The occupied valley observed complete strike in reaction to the killing, the roads remained deserted and local train services across Kashmir was suspended. Restrictions on movement were imposed in some sensitive areas of Srinagar. High-speed mobile internet services, which remained snapped throughout the day, were restored at night.

The deputy commissioner of Shopian has been asked to probe the incident and submit a report within 20 days.

The two deaths in Shopian took the toll of civilian killings due to firing by forces in Kashmir to four this month.

17-year-old Shakir Ahmad was killed after security forces allegedly opened fire on protesters near – an incident that the police said was a case of “cross-fire”. Earlier, on January 9, 22-year-old Khalid Ahmad Dar died during protests after army fired on a group that was allegedly pelting stones at a military camp in Khudwani in Kulgam.

In 2017, according to police figures, at least 24 civilians had lost their lives during gun battles between security forces and militants in Kashmir.