China has already made India clear on CPEC and doesn't need to repeat it: Foreign Ministry spokesperson
29 Jan, 2018 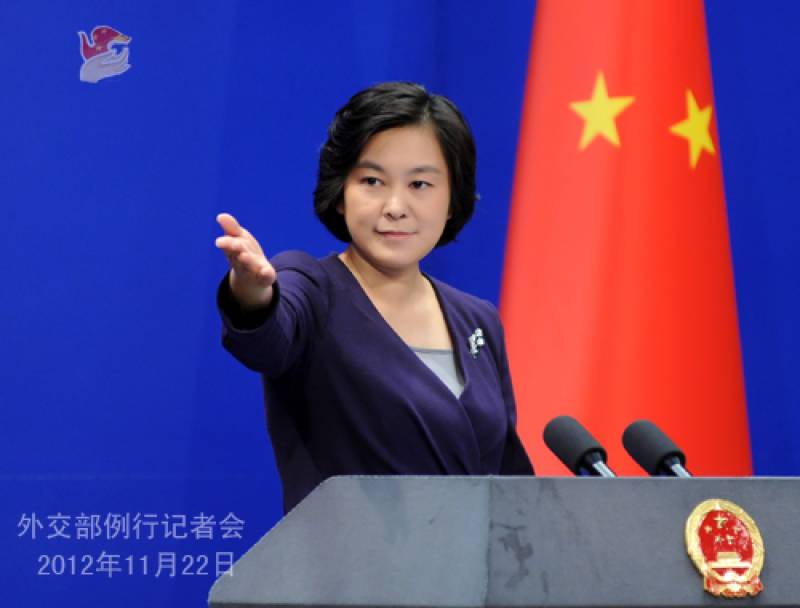 BEIJING - While appreciating comments of Prime Minister Shahid Khaqan Abbasi on Belt and Road Initiative at Davos World Economic Forum, a Chinese foreign ministry spokesperson said Monday that initiative originated in China, but the opportunities and achievements in building the Belt and Road initiative belong to the world.

“We have always said that the initiative to jointly build the Belt and Road initiative originated in China, but the opportunities and achievements in building the Belt and Road initiative belong to the world,”Hua Chunying said during her regular briefing here. She said that the Chinese side would cement the overall global economic recovery by expanding the physical and cultural environment of interconnection and expanding effective global demand.

The Prime Minister in a recently attended a forum discussion and media interview in Davos World Economic Forum in Switzerland had said that the “One Belt and Road Initiative” proposed by President Xi Jinping would help enhance the level of global connectivity.

Pakistan was an important participant in the Belt and Road Initiative and had truly felt the many benefits that the initiative had brought to Pakistan’s economic development.

In the recent five years, the “Belt and Road” had proceeded smoothly and also achieved fruitful results, she said and added, “It has provided a large number of employment opportunities for the countries concerned, improved the development environment for participating countries and the space and potential for regional cooperation, and are welcomed by the countries and peoples concerned.”

Hua Chunying said that China was ready to work with all parties to continue to firmly promote the “Belt and Road” in line with the principle of jointly building and sharing and open up broader prospects for the common development and prosperity of all countries in the world.

Responding to a question about Indian Ambassador to China, she said that regarding China-Pakistan Economic Corridor (CPEC), China had clarified its position on many occasions and she would not repeat it.

With regard to the differences between China and India, she said that China was ready to maintain communication and dialogue with the Indian side and properly control it.

“It will also actively seek solutions acceptable to both sides so that the differences will not affect the overall situation of the relations between the two countries. This is in the best interests of both countries”, she added.

To yet another question, she explained that divergence between any two or two countries required that both parties showed sincerity and flexibility and promoted understanding and mutual trust through dialogues in the spirit of equality and mutual respect so as to seek proper handling and control over differences.

“We have said many times that the CPEC is purely an economic cooperation project that does not involve the issue of territorial disputes nor any third party. I hope India will treat this issue objectively,” she added.

To a question about China-India border dispute, she said that China had said many times that the Sino-Indian border Sikkim had been demarcated by history, and that the Donglang region belonged to China and had always been under China’s effective jurisdiction.

The spokesperson said that China had made it clear that China would continue to exercise its sovereignty rights in such a porous area in accordance with the stipulations of historical conventions and safeguard its own territorial sovereignty.

She said that the Chinese side’s infrastructure construction activities in the turbulent area belong to the affairs within the sovereignty of China and were completely legitimate and legitimate.

She said that China and India, as two major neighboring countries in Asia and two big developing countries, should regard each other as opportunities for development rather than threats.

On the meeting of the Sino-Indian border defense forces held a border meeting, she said that the Chinese side believed that strengthening communication and exchanges between the border guards helps to enhance mutual understanding and mutual trust and was conducive to jointly safeguarding peace and tranquillity in the border areas.