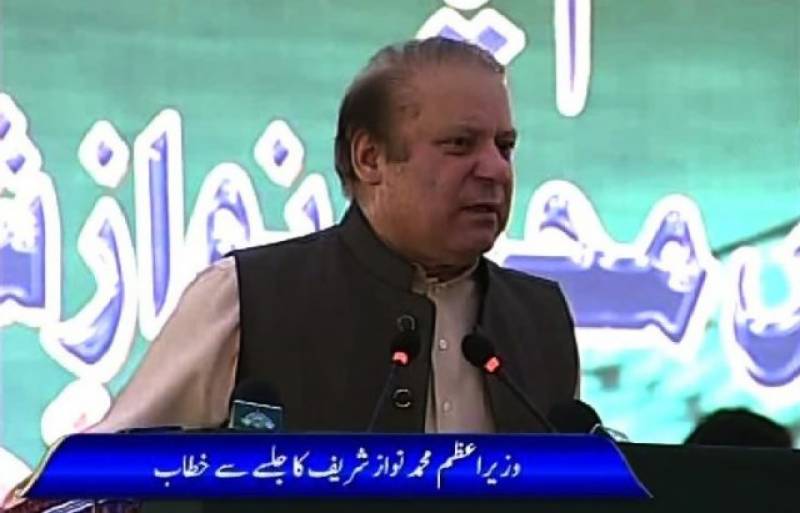 OKARA: The prime minister said it was strange that the `inventors' of loadshedding were now protesting and urged the audience to account them for dragging the country into darkness.

However, he reiterated his government's resolve to salvage the country from loadshedding by 2018 as power projects were about to be inaugurated on monthly basis.

After recently opened 1300 MW Bhikki power plant, he said it would follow the operationalization of Qadirpur power plant, Balloki, Port Qasim and Tarbella-IV plants of same capacity each, besides Neelum Jhelum hydropower project to add 960 MW.

Criticising the opposition, the prime minister said they would be left just to protest as the PML-N would keep up its journey of national development.

Brushing aside the PTI's demand for resignation, he said, "Will Nawaz Sharif resign on your demand? Go and play cricket.

Politics is none of your business. Running the country is not your baby. Playing cricket suffices you. Even, now you cannot play that too. I played cricket too and am serving the people as well," he remarked.

He announced to visit Dipalpur city before the month of holy Ramazan to announce development projects there.

He said Rs 470 million would be spent for gas supply to Okara city, Rs 740 million for Dipalpur Chowk flyover and Rs 200 million for uplift of the city's roads. The existing 200-bed hospital would be upgraded to 500-bed facility, he said accepting the demands earlier put forth by MNA Riazul Haq Juj.

He also told the audience that a six-lane motorway was being constructed from Lahore to Karachi.

Earlier, in their addresses, the MNAs welcomed the prime minister and thanked him for generously accepting their demands for a development package for the city of 3.2 million populace. (APP)