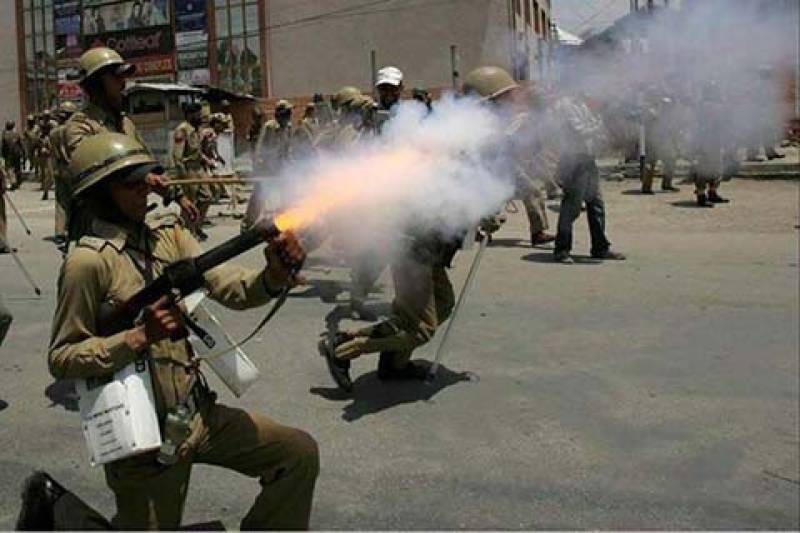 ISLAMABAD: The High Court Bar Association (HCBA) of occupied Kashmir has said that pellet guns cannot be used as means of crowd control as per the Indian Constitution, Code of Criminal Procedure and the International Covenants.

According to KMS, the HCBA said this in its response to the stand taken by Government of India in the apex court on use of pellet guns against protesters in occupied Kashmir.

The HCBA is demanding ban on the use of pellet guns in the occupied territory.

A bench of Indian Supreme Court headed by the Chief Justice, J S Khehar, and comprising Justices, D Y Chandrachud and S K Kaul, was hearing a plea by the HCBA seeking ban on use of pellets in occupied Kashmir. The President of HCBA, Mian Abdul Qayoom, and senior Advocate, Z A Shah, argued the case on behalf of the bar association.

Pointing out that there is no law governing use of pellet guns and even legislature has made no such law to regulate use of these weapons, the HCBA said, "It is, therefore, submitted that the use of pellet guns, not being subject to any law or subject to any provision of the existing laws, their use is patently arbitrary and contrary to the Constitution."

The lawyers' body said that the use of pellet guns had caused death of various individuals when fired from a short range.

"It has deprived scores of people of their eyesight. It has inflicted multiple injuries on the body of individuals," it said and submitted that these guns needed to be banned forthwith. It has pleaded that provisions of Sections 127-131 of the Jammu and Kashmir Code of Criminal Procedure regulate to some extent use of force against unlawful assemblies but none of these provisions deal with use of pellet guns.

The HCBA pleaded that under the provisions of Code of Criminal Procedure the presence of Executive Magistrate on spot was required in certain situations, it was assumed that as and when firing had to be resorted to, and prior permission of the

Referring to the arguments that use of pellet guns is not lethal, the HCBA pleaded that the annexure it has filed clearly establishes that pellet guns, when fired from a short range are as lethal as a bullet and can cause death. "This has been certified by an International Organization, as reported in Press," it said. (APP)