Turks reiterate support for Kashmiris’ right to self determination
28 Oct, 2018 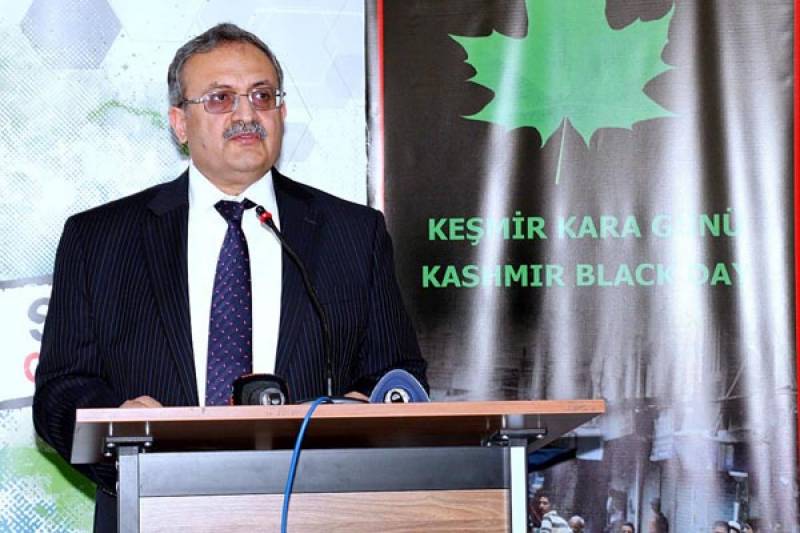 The Youth Assembly of Konya’s Selcuklu Municipility and the Embassy of Pakistan have jointly organized a seminar on the Kashmir Black Day and expressed solidarity with the oppressed people in the Indian Occupied Kashmir (IoK).

They also reaffirmed their unflinching support for Kashmiris’ democratic right to self-determination.

Appreciating Turkey’s steadfast support, Pakistan ambassador to Turkey Muhammad Syrus Sajjad Qazi said the presence of such a large number of participants in the observance of “Black Day” was a further manifestation of Turkey’s abiding commitment to this noble cause.

The ambassador said over 95,000 innocent Kashmiris had been martyred since 1989 and the martyrdom of young Kashmiri leader Burhan Wani in 2016 infused a new spirit to the indigenous Kashmiri freedom movement, adding that no amount of brute force had been able to break the will of the Kashmiri people.

He noted that generations of Kashmiris were being punished for demanding their inalienable right to self-determination, a right repeatedly pledged to them in the shape of Security Council resolutions.

“The global community has failed to implement these resolutions. India has exploited this collective failure by resorting to state terrorism to suppress the legitimate aspirations of the Kashmiri people,” he added.

Ambassador Qazi referred to a report released by the Office of the UN High Commissioner for Human Rights, which chronicled the massive human rights violations in Indian Occupied Kashmir.

“Pakistan endorses the UN Report and calls for early institution of a Commission of Inquiry under UN auspices to investigate and fix responsibility,” he added.

He further reiterated that Pakistan would continue to extend maximum political, diplomatic and moral support to the people of Kashmir.

He hoped that their combined efforts would help shake the world conscience and pave the way for the dawn of peace, hope and freedom for the struggling people of IoK.

Ali Sahin, a parliamentarian, in his address reiterated Turkish support for the Kashmiri people and said that Turkey would continue its strong solidarity with the oppressed people in any geography including the people of Indian Occupied Kashmir and Palestine.He said Turkish support would continue till final resolution of the Jammu & Kashmir dispute.

President of “Kashmir Working Group” of the Youth Assembly of Selcuklu Konya shared his group’s research about Kashmir issue with the audience.

He condemned Indian brutalities in the IoK and said his group would continue to work to raise awareness about Kashmir issue in Turkey.