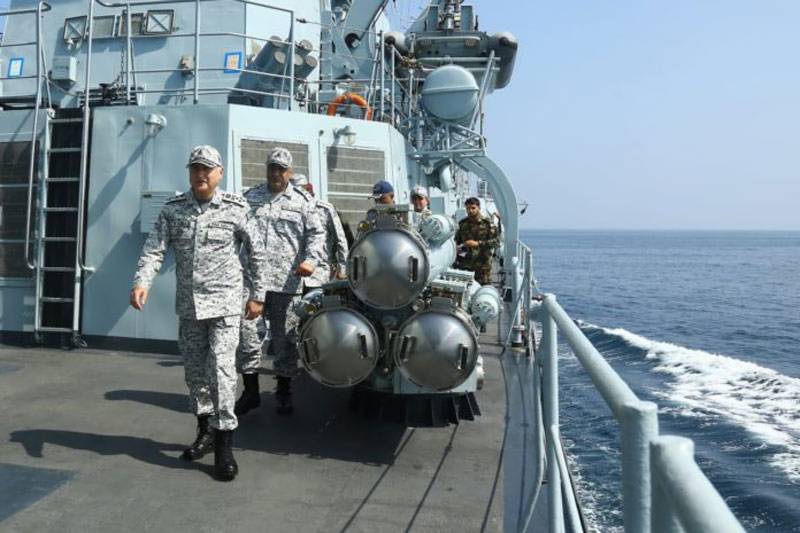 KARACHI - In the backdrop of ongoing major Maritime Exercise SEASPARK 2018, Chief of the Naval Staff, Admiral Zafar Mahmood Abbasi witnessed the wide ranging naval maneuvers by an array of naval combat platforms in North Arabian Sea which was aimed to showcase the combat readiness of Pakistan Navy.

Chief of the Naval Staff was given detailed briefings on conduct of the exercise and deployment of PN assets out at sea including ships, submarines, aircraft, UAVs, Special Forces and Pak Marines along with elements of PMSA and PAF.Admiral Zafar Mahmood Abbasi expressed utmost satisfaction and confidence in the operational capabilities of Pakistan Navy and urged that the prevalent challenges necessitate eternal vigilance and readiness to safeguard the national maritime interests against external and internal threats.

The Naval Chief also interacted with the crew of the Ships and lauded their professionalism and dedication while performing the sacred duties of defending maritime frontiers of the Motherland. Later, during the day Chief of the Naval Staff also attended operational briefings of Force Commanders at PNS BAHADUR to review and validate their deployment/ war plans.

Exercise SEASPARK 2018 will amply afford valuable opportunity to enhance combat readiness of Pakistan Navy and interoperability with sister services as well. Besides enhancement of operational preparedness, the exercise will also focus on seaward defence of the coast and response against emerging non-traditional threats emanating from sea including maritime component of CPEC and GWADAR Port.

Pakistan Navy is combat ready multi-dimensional force and fully committed to protect national maritime interests at all costs during peace and war. The exercise SEASPARK 2018 would therefore provide impetus to Pakistan’s resolve of maintaining peace, security and lawful order at sea.