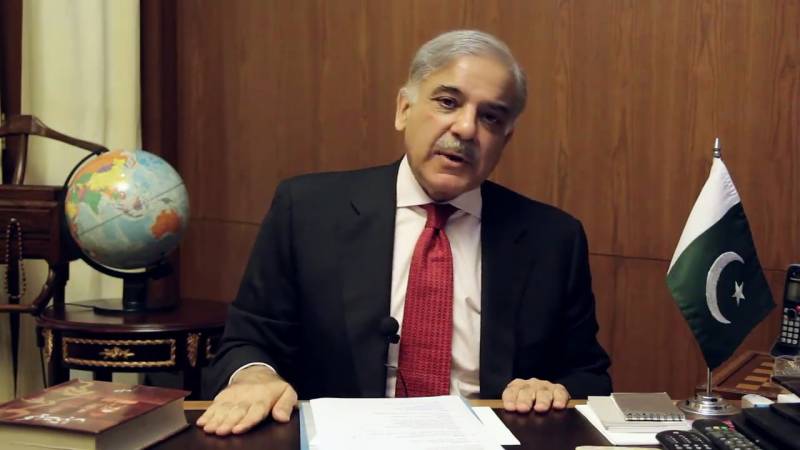 LAHORE (APP): Punjab Chief Minister Muhammad Shehbaz Sharif on Thursday said no one other than Modi could be happy over the plan of lockdown of Pakistan by Niazi Sahib as conspiracies were being hatched from within the country to stop the way of progress and prosperity of Pakistan.

He expressed these views while addressing a seminar on the topic of "Peaceful Pakistan-Prosperous Pakistan" at a local hotel under the aegis of Lahore Chamber of Commerce & Industry.

He said those conspirating to lockdown Islamabad, Pakistan and CPEC were materializing the dreams of enemy of Pakistan sitting across east border in the real sense which was a great cruelty to Pakistan and its 20 crore people.

Imran Khan wanted to do economic murder of people of Pakistan by lock-downing Islamabad by becoming "Brown Sahib" but the nation would never allow to do so and prove to be rockwall for foiling his designs, he added.

A leader who had to guide the nation, unfortunately, had indulged in telling lies, he said. From where he had learnt such leadership, he questioned?

Shehbaz Sharif said Imran Khan intended to lockdown Pakistan through the money of those who got written off loans of billions of rupees of the nation and loot and plunder of qabza mafia and wanted to increase difficulties and problems of the nations through sit-ins.

He said the nation had to decide whether it wanted progress and prosperity of the country or its ruining by supporting these elements. "It has to decide to make the country a Pakistan of Quaid and Iqbal or stop the country move ahead by closing projects like CPEC through sit-ins," he added.

The Chief Minister said it was his faith that if a nation decided to achieve its goal then no hurdle could be created in its way. He expressed the hope that soon darkness would be removed from the country and it would complete its journey of progress and prosperity successfully.

Shehbaz Sharif said China had proved to be a sincere friend by giving an investment package of 46 billion dollar in Pakistan in a difficult hour.

He said implementation of CPEC projects was delayed due to sit-ins. "There is no role of Modi or any Jew in postponement of visit of Chinese President to Pakistan nor foreign hands were involved in it, all it was done by some our own who wasted precious time of the nation by staging sit-ins in Islamabad in 2014," he said. These elements even did not give any importance to the request of Chinese Ambassador for the visit of Chinese President to Pakistan, he added.

Shehbaz Sharif said had these elements not staged sit-in, Chinese President had visited Pakistan in September 2014 and agreements had been signed and a number of projects would had been in final stages of completion. But, the enemies of Pakistan and CPEC postponed the visit of Chinese President who visited Pakistan in April 2015 and agreements were signed, he added. He said immediately after signing of these projects, their implementation was started.

He said under CPEC, work was being carried out speedily on energy projects throughout the country and darkness would be removed from Pakistan with the completion of several energy projects next year.

He said it would be the first opportunity in the history of the country that projects were going to complete before stipulated period. He said 1320-Megawatt Sahiwal Coal Power Project was to be completed in December 2017, however, it would be completed in a record period of 2.5 years in June 2017.

He said under the leadership of Prime Minister Muhammad Nawaz Sharif, work was continuing on energy projects. On the other hand, work was started on 900-Megawatt Neelam Jhelum Hydro Power Project in 2004-05 and its estimated cost was 800 million dollar, which was still under construction and its cost had also increased, he added. He said no society or country could afford such criminal negligence.

He said, "CPEC is a great blessing of Allah Almighty for Pakistan, which should be completed at all costs." He said work was being continued round the clock speedily and transparently on CPEC projects.

He said billions of rupees of the nation had been saved in 3600-Megawatt Gas-Based Projects and if corruption of even a single penny was proved in these projects then he was ready to be held accountable by the people.

The Chief Minister asked Niazi Sahib to help any orphan, widow or poor through the money being spent on sit-ins to increase the difficulties of the people. Imran Khan had no concern with the condition of common man, he added.

Shehbaz Sharif said Imran Khan even did not know the situation of his own province Khyber Pakhtunkhawa that how the human beings residing on the mountains covered with ice were leading their lives. He said the doors of prosperity of common man were being opened through CPEC and Imran Khan was out to close them through sit-ins.

The Chief Minister said it was the demand of Imran Khan that institutions should take action regarding Panama Leaks. Now when this matter had come to Supreme Court and Prime Minister Muhammad Nawaz Sharif had decided to present himself and his children in the court by refusing support of legal and technical aspects about hearing of the case, then there was no justification of protest and lockdown of Islamabad, he added.

He said if Imran Khan still insisted on protest then it means that he (Imran) had no confidence in Supreme Court or its judges. If this was the case, then he should openly tell to the nation, he added.

He said Imran Khan also leveled allegations of corruption regarding Orange Line Metro Train, the project of common man. Shehbaz Sharif said when High Court gave its decision consisting of 300 pages regarding historical places, there was not a single word of corruption in it.

He said Orange Line Metro Train was the project of provision of comfortable, safe and economic transport facilities to common man of Pakistan and this splendid project of public welfare would be completed.

The Chief Minister said he had great respect for courts and also accepted their decisions. Neither he would express no-confidence over the courts nor think of staging sit-in or lock downing of Pakistan, he added.

He said those thinking of lock-downing of Pakistan were enemy to progress and prosperity of the country.

He said, "We have been listening for decades that Pak-China friendship is higher than Himalayas, deeper than oceans, sweeter than honey and stronger than steel and it has been practically witnessed in the shape of CPEC."

Shehbaz Sharif said that under CPEC, projects were being forwarded speedily and an example of hard work, honesty and transparency.

Addressing the traders, industrialists and business personalities present in the hall, the Chief Minister said they were representing the entire Pakistan and had to play their role for saving the future of coming generations and achieving the destiny of prosperous of Pakistan.

CPEC security: Pakistan to launch satellite for the security of CPEC project

He said prosperity was impossible without peace and they had to foil the conspiracy of enemies against development of Pakistan by standing with the projects of labourers, students, teachers, lawyers, doctors and common man by remaining away from the politics of sit-ins, strikes and anarchy.

He said, "Pakistan is the country of 20 crore people and we have to move it forward jointly." He said under the leadership of Prime Minister Muhammad Nawaz Sharif, Pakistan was coming out of quagmire of problems and at this time, there was no justification of protests and sit-ins.

The Chief Minister said Khan Sahib leveled baseless, false and wrong allegations of corruption against him and he had replied in a comprehensive manner with proves yesterday.

He said he would not respond these allegations through his speeches but in the court and his lawyers were preparing notes in this regard. He said he would also request the court to give its decision soon. He said records of those existed who looted Pakistan through corruption, got written off loans and grabbed lands of the people.

Shehbaz Sharif said Musharraf toppled democratic government on October 12, 1999 and introduced the law of plea-bargain for giving protection to such corrupt elements and in this way, irreparable loss was caused to the country. He said, "By achieving the goal of development and progress of Pakistan, we have to succeed in the court of people and will work round the clock for achieving this objective."

Shehbaz Sharif said today, traders and industrialists had strongly condemned the sit-in and said that they would not become a part of the announcement of lockdown of Islamabad and raise full voice against it.

Speaking on the occasion, President Lahore Chamber of Commerce & Industry Abdul Basit said that peace was an integral part of continuity in economic activities and no one could be granted permission of playing with future of the nation and the country for completion of personal agenda. He said that if someone was trying to create hurdles in the journey of development, he was strengthening the agenda of enemy and loss of country and the nation. Traders' community would discourage those creating hurdles in the way of progress, he added.

Trader leaders Iftikhar Ali Malik, Naeem Mir, Khalid Pervaiz, Ajmal Baloch, Aamir Fiaz Sheikh and Muhammad Ashraf Bhatti also addressed the seminar and said that some unwise persons were out to sacrifice the interests of the country for the achievement of their political gains. People had sent them to the parliament through their vote for resolution of their problems but these people, instead of resolving problems in parliament, wanted to complete their interests by coming on roads, they added.

They said, "Pakistan is our home and he who talks of damaging our home is harming Islamic Democratic of Pakistan in the real sense." They said that patriotic traders would not allow anyone to play with the interests of the country and stopping business or ways. They said that if constitution gave permission of protest to these elements, it was also protector of their rights.

Provincial Ministers, Assembly Members, representatives of trader organizations from all over the country, industrialists, investors, intellectuals and traders participated in the seminar in large numbers.