Neither Iove nor divorce but respectful friendship, Pakistan tells US
28 Nov, 2017 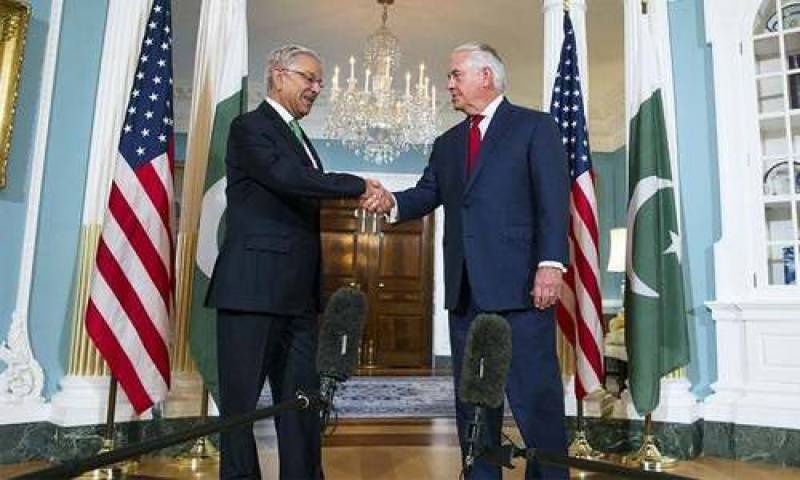 WASHINGTON – Pakistan’s Ambassador to United States Aizaz Chaudhry has said Islamabad intends to strengthen its bilateral relations with Washington, based on mutual respect and dignity.

He was addressing a distinguished gathering of Pakistani Journalists at a dinner hosted by Pakistani American Press Association (PAPA). The dinner was also attended by a delegation of prominent Pakistani journalists including President Pakistan Federal Union of Journalists (PFUJ) Afzal Butt and President National Press Club (NPC) Shakeel Anjum who are currently visiting United States of America. Chaudhry was the chief guest on the occasion.

Speaking on the occasion, the envoy gave detailed overview of the current state of relations between Pakistan and the US. He emphasised that positive trajectory in Pak-US relations has always been beneficial for both the countries. “Pakistan is a peace loving nation. We are following a positive agenda and looking forward to having a long term, sustainable and broad-based relations with the US,” he added.

Chaudhry said that peace in Afghanistan is in the interest of both Pakistan and the US. Pakistan’s hard-won economic and security gains would be at risk as long as Afghanistan remains unstable, he highlighted.

Commenting on the role and responsibilities of the journalists in modern era, the ambassador appreciated the vibrant role being played by the print and electronic media to safeguard public interest in Pakistan. He urged the journalists to follow the principles of objectivity, fairness, accuracy and impartiality in their reporting. Journalism is a ‘sacred responsibility’, he added.

President PFUJ, President NPC and other members of the media delegation also expressed their views on various topics. The speakers apprised the audience about the problems/challenges being faced by the working journalists in Pakistan. They also highlighted the need for objective and balanced reporting by the mainstream Pakistani journalists while discouraging unhealthy trend of sensationalism in which ‘truth and facts’ are always the first casualty.

The event was well-attended by the DC-based Pakistani American journalists. Ambassador Aizaz Chaudhry thanked the PAPA organisers for arranging such an informative session that provided an opportunity for the participants and the event was concluded on a positive note.