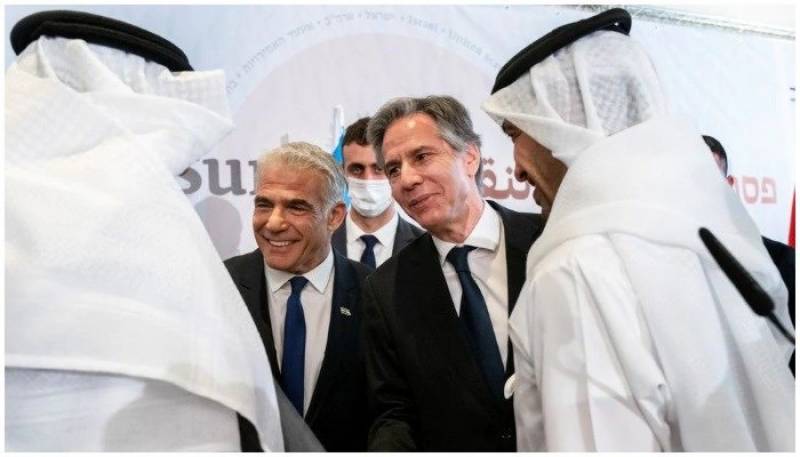 US Secretary of State Antony Blinken and the top diplomats of Israel and four Arab states wrapped up a landmark meeting Monday vowing to boost cooperation, which Israel said would send a strong message to its arch-foe Iran.

The talks brought together for the first time on Israeli soil the foreign ministers of the United Arab Emirates, Bahrain and Morocco — which all normalised ties with the Jewish state in 2020 — and of Egypt, a country formally at peace with Israel since 1979.

Israel’s Foreign Minister Yair Lapid said that "this new architecture, the shared capabilities we are building, intimidates and deters our common enemies — first and foremost Iran and its proxies.

"They certainly have something to fear," he said about Iran, a country Israel is fighting in a regional shadow war and which it accuses of seeking a nuclear bomb, a goal the Islamic republic denies pursuing.

UAE Foreign Minister Abdullah bin Zayed Al Nahyan called the two-day gathering "historic" and said that "what we are trying to achieve here is changing the narrative, creating a different future".

The meeting’s Sunday opening, in the Sde Boker kibbutz in the Negev desert, was marred by a shooting attack in northern Israel that killed two police officers and was claimed by the Daesh group, which has rarely managed to stage attacks inside Israel.

And early Monday, Prime Minister Naftali Bennett’s office confirmed he had caught COVID, a day after he held closed-door meetings with Blinken followed by a joint press conference without masks. Iran nuclear deal

The talks on restoring the 2015 Iran nuclear deal were high on the agenda at the Negev gathering and in Blinken’s meetings with Israeli officials.

The European Union’s foreign policy chief said at the weekend that an agreement with Iran to restore the so-called Joint Comprehensive Plan of Action could be reached "in a matter of days".

That has raised concern in Israel and across much of the Middle East, where many US-allied Arab states view Iran as a menace.

An Israeli official, speaking to *AFP *on condition of anonymity, said after the Sde Boker talks: "All countries here except the US have reservations about a nuclear deal with Iran and what happened is that we got them closer to our approach."

Blinken on Sunday stressed that Israel and the US "see eye-to-eye" on the core issue of stopping Iran from ever getting a nuclear bomb, despite their differences on the JCPOA. ‘No substitute’

Israeli leaders have argued that the normalisations highlight a changed Middle East, where Arab leaders are no longer compelled to isolate Israel over its unsolved conflict with the Palestinians.

The Abraham Accords infuriated the Palestinians, who argued that they marked a betrayal of a decades-old Arab League consensus.

A small group of protesters outside the Negev venue sought to force the Palestinian issue into the room, waving placards that said "Haven’t you forgotten someone?"

Blinken – who departed Israel on Monday afternoon for Morocco -- has voiced strong support for the Abraham Accords but cautioned that they cannot replace Israeli-Palestinian peace-building.

"We have to be clear that these regional peace agreements are not a substitute for progress between Palestinians and Israelis," said Blinken, who had on Sunday met Palestinian president Mahmud Abbas in the Israeli-occupied West Bank.

Blinken has insisted that President Joe Biden’s administration is committed to repairing Palestinian relations, which collapsed under Trump.

But the Palestinian leader told Blinken on Sunday that the West showed "double standards," taking a hard line against Russia’s invasion of Ukraine while ignoring what he called Israel’s "crimes" against his people.

As the diplomats were wrapped up in their Negev meeting, Abbas hosted Jordan’s King Abdullah II in Ramallah, the monarch’s first visit to the West Bank since 2017.

Jordan – the only Arab country with full Israeli ties that was not at the Negev meeting – has played a middleman role between Israel and the Palestinian Authority.

Jordan’s king seemed to echo Blinken’s warning about the limits of normalisation in his meeting with Abbas, saying that "the region cannot enjoy security and stability without a just and comprehensive solution to the Palestinian issue", according to the official Palestinian news agency. -APP/AFP