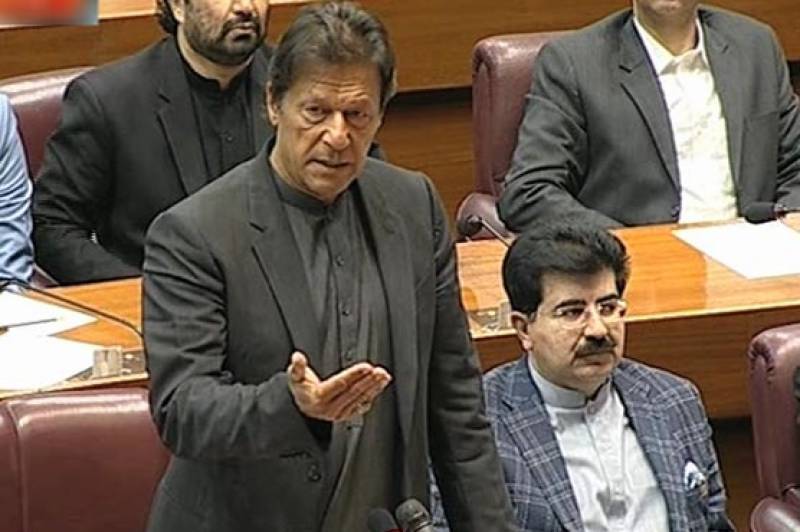 ISLAMABAD – Prime Minister Imran Khan Thursday gave policy statement in the National Assembly on recent rising tension between Pakistan and India said Islamabad’s efforts to de-escalate tensions should not be considered as our weakness.

Addressing the National Assembly Imran Khan said, “We tried to resolve issues through dialogue to lower tensions between both countries. India started blaming Pakistan 30 minutes after Indian soldiers were targeted in Pulwama district of Occupied Kashmir.”

“I immediately offered India to provide actionable evidence because we have vowed not to allow our soil to be used against any other country. Unfortunately, war hysteria started booming in India.

“I would like to thank Pakistani media for reporting events responsibly. Our media showed mature attitude, but sadly, Indian media created war hysteria and we feared that India will do something foolish.

"India has provided dossier on Pulwama incident today after 14 days. They attacked Pakistan two days back. All this would have been averted if they had provided the details earlier.

“I was informed around 3:30am about Indian act of aggression. I talked to Army Chief and Air Chief and discussed how we should respond. As a responsible state, we did not retaliate immediately to avoid escalation.

"Our armed forces have fought against terrorism valiantly. They have become battle-hardened. However, we did not want any further escalation as it won’t be in favor of any country.

"Indigenous movement has started in Kashmir. The more they (Indian forces) will oppress Kashmiris, the more they will rise against them.

“No one questions why a 19-year-old made himself a human bomb to target Indian forces in Occupied Kashmir. What was the reason that he took action to such extent? India must realize that tactics of torture won’t work anymore. There is a need of debate on Kashmir in India.

“Indians are terming recent attacks in Kashmir as Islamic radicalism. If you remember, most suicide attacks were carried out by Tamil Tigers in Sri Lanka.

“I tried to talk to Indian Prime Minister Narendra Modi to de-escalate tensions but this move should not be considered our weakness.

“I am conveying a message to Narendra Modi today. I am well aware that our armed forces are fully ready. I feared that India might conduct a missile attack. I hope international community would play its part to control the situation.

“As a peace gesture, we are releasing Indian pilot tomorrow (Friday).”