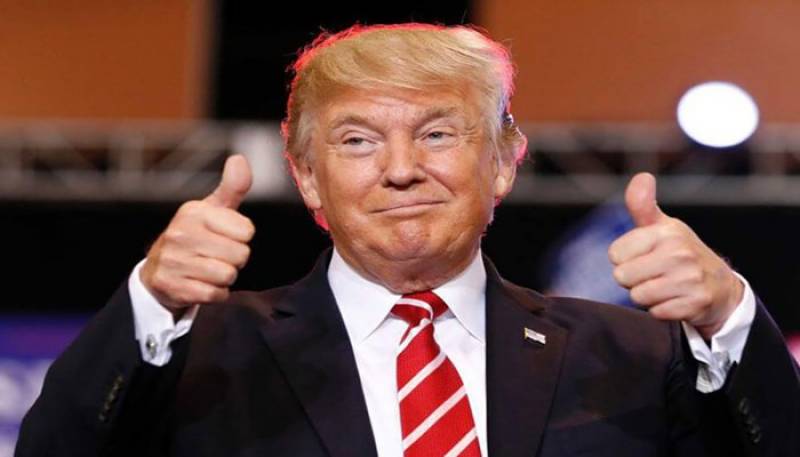 WASHINGTON: US President Donald Trump on Friday hailed the "historic" summit between the two Koreas, saying that "good things" are happening on the peninsula ahead of his own highly anticipated meeting with the North’s leader Kim Jong Un.

"After a furious year of missile launches and Nuclear testing, a historic meeting between North and South Korea is now taking place," Trump wrote on Twitter.

"KOREAN WAR TO END! The United States, and all of its GREAT people, should be very proud of what is now taking place in Korea!" he tweeted.

Kim met Friday with South Korean President Moon Jae-in, and the pair agreed to pursue a permanent peace treaty and the complete denuclearization of their divided peninsula.

An armistice brought the fighting on the Korean peninsula to an end in 1953, but 65 years later, a final peace agreement has still not been reached.

The US president also praised his Chinese counterpart Xi Jinping’s efforts on North Korea, calling them a "great help."

"Please do not forget the great help that my good friend, President Xi of China, has given to the United States, particularly at the Border of North Korea. Without him it would have been a much longer, tougher, process!" he tweeted.

Beijing is Pyongyang’s sole major ally but it has supported a series of United Nations sanctions to punish the North over its nuclear and missile tests.

China has pressed for dialogue to peacefully resolve the crisis.

Trump gave credit to China, but US Senator Lindsay Graham said the US president’s efforts could be worthy of the Nobel Peace Prize — an honor won by Barack Obama and Jimmy Carter, Woodrow Wilson and Theodore Roosevelt.

While Trump praised progress on North Korea, he also struck a somewhat cautious tone, writing that: "Good things are happening, but only time will tell!"

Trump said Thursday that three or four dates were under consideration for his meeting with Kim, which he has previously said could take place by early June.

The summit between the two Koreas -- only the third since 1953 -- was the highest-level encounter yet in a whirlwind of nuclear diplomacy.

But the two previous Korean summits in 2000 and 2007, both of them in Pyongyang, also ended with displays of affection and similar pledges, but the agreements ultimately came to naught.

Last year, Pyongyang carried out its sixth nuclear test, by far its most powerful to date, and launched missiles capable of reaching the US mainland.

Its actions sent tensions soaring as Kim and Trump traded personal insults and threats of war.

Moon seized on the South’s Winter Olympics as an opportunity to broker dialogue between them, and has said his meeting with Kim would serve to set up the summit between Pyongyang and Washington.

Trump has demanded the North give up its weapons, and Washington is pressing for it to do so in a complete, verifiable and irreversible way.

Pyongyang is demanding as yet unspecified security guarantees to discuss its arsenal. APP/AFP