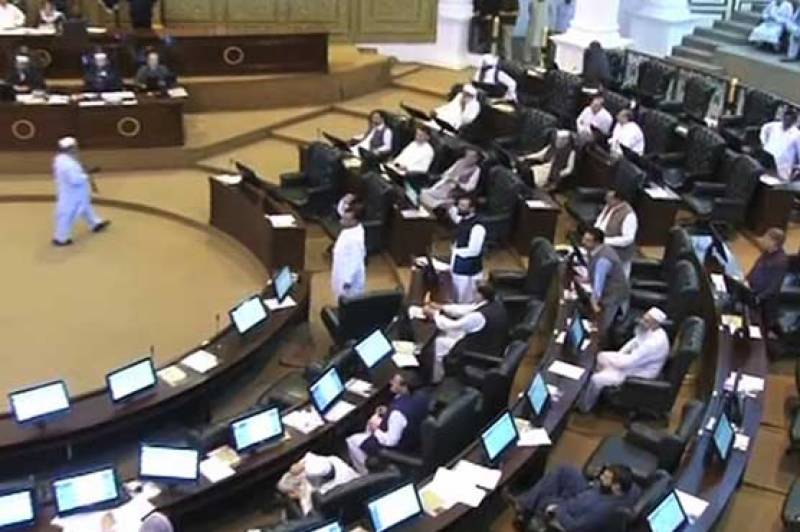 PESHAWAR: The PML-N and other opposition legislators Friday reigned the proceedings of the Khyber Pakhtunkhwa Assembly and echoed the slogans of "Go Imran Go" in the PTI dominated house.

Khyber Pakhtunkhwa Assembly resumed the proceedings after a break of two days with Deputy Speaker, Dr. Meher Taj Roghani in the chair.

The house begun proceedings with the question hour and several questions regarding the Department of Environment were disposed and one question of the Syed Sardar Hussain of PPP relating to the quota of district Chitral in the employees of Forest Department and issuance of forest harvesting permits was handed over to the concerned standing committee of the house.

Although environment in the house was normal and proceedings were continued as usual. However, the situation turned worse when Sahibzada Sanaullah of PPP demanded inquiry into irregularities in recruitment in Forest Department in Dir Upper and Dir Lower.

The PPP MPA complained that though the minimum qualification required for applicants was F.Sc, but the provincial government in violation of merit had recruited matriculates.

The JI legislators on this occasion requested the chair to defer the questions till the presence of the Minister concerned in the house. However, the parliamentary secretary, Fazal Elahi rejected the impression of the violation of merit and said that minimum required qualification was matric with science subjects. So there was no violation of merit in the recruitment.

The mover of the question was demanding the referring of the issue to the house standing committee on environment. However, Begum Meraj Hamayun of QWP complained that most of the house committees are ineffective and redundant and holding no regular meeting.

But, along with these remarks, she also pinpointed the lack of quorum in the house to which the Deputy Speaker directed the counting.

The pinpointing of the lack of quorum and absence of the PTI legislators from the house triggered protest by the angry legislators of PML-N and other opposition parties.

The PML-N legislators chanted slogans "Go Imran Go" and a rumpus was created in the house. Except, the only PTI MPA, Fazal Elahi, the benches reserved for the PTI legislators were empty.

After counting and finding the lack of quorum, the Deputy Speaker adjourned the proceedings of the house till 3:00 P.M of the upcoming Tuesday. (APP)